Portfolio Managers Dave Ellison and Ryan Kelley discuss the Financials sector during the pandemic, bank valuations and margins, merger and acquisition activity, and their outlook for the sector.

How have Financials fared during the pandemic?

Since the beginning of 2020 through the end of April 2021, the Financials sector has underperformed the overall market. Financials increased approximately 20% while the S&P 500® Index rose 32%. However, we have seen significant differences in performance among the various subsectors within the Financials sector. Many transaction-oriented companies and subsectors such as FinTech have done exceptionally well during the pandemic, including PayPal, Square, Mastercard, BlackRock, and Goldman Sachs.

In contrast, the stock prices of banks were severely impacted in the spring and summer of 2020 due to concerns over potential asset quality issues and extremely low interest rates. Since then, banks’ stock prices have staged a dramatic turnaround. Starting in Q4 2020 through April 2021, the total return of the Financials sector was double the S&P 500® Index, large banks were up over 77%, and regional banks nearly doubled. 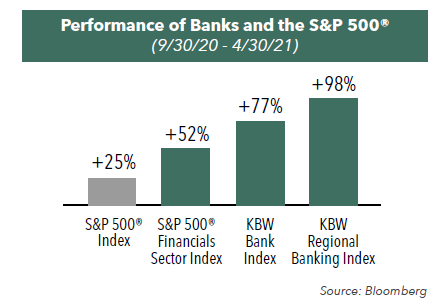 How do valuations currently look for regional banks?

Despite their recent run-up, valuations for regional and community banks continue to look attractive relative to the market and on a historical basis. On a price to earnings basis, regional banks are trading at 14x 2021 estimates, while the S&P 500® is trading at 24x, which represents an approximate 40% discount. In addition, the median price to tangible book value for regional and community banks is 1.7x, slightly below 2019 levels.

What is the impact of recent steepening of the yield curve on net interest margins?

The net interest margin (NIM), the difference between income generated from loans and the cost of funds, is a fundamental part of a bank’s earnings stream. Many larger banks get at least half of their revenues from the NIM, and for smaller banks, it can be as much as 75% to 80% of their revenues. With interest rates at the low end of the range, a narrower margin has affected banks’ profitability. Over the next three to five years, as economies improve and the Federal Reserve allows rates to rise, banks will be able to generate higher NIMs. Importantly, even a modest rise in rates can significantly improve margins.

What is your opinion on FinTech and payment technology companies?

The pandemic accelerated the adoption of online and contactless payments, paving the way for alternative payment methods and payment processors, such as Apple, Square, and PayPal, to gain market share. These payment processors and other FinTech businesses are a competitive threat to the traditional banking business model. We believe this is a positive development, as it could drive many banks to change their business model, focus on their cost structures, become more profitable, or consolidate.

These non-bank companies have been a meaningful portfolio component of the Hennessy Large Cap Financial Fund for some time. We favor these companies because many are highly profitable and have less exposure to credit cycles or bank regulation.

Would you please discuss M&A activity in the Financials sector?

Bank M&A activity dropped precipitously during the pandemic in 2020 but has surged in 2021. In fact, in April 2021, four deals were announced in two days. On a year-to-date basis through April 2021, 53 deals have been announced with an aggregate deal value of $25 billion, which is on pace to return to robust 2016-19 levels. Yet we still have a ways to go on takeout valuations, which are at a discount to where they were five to 10 years ago.

The Hennessy Small Cap Financial Fund has benefitted from bank consolidation throughout the years, and we believe this trend will continue going forward.

What is your outlook on the Financials sector?

Unlike some prior downturns, the banking industry, with the help of fiscal and monetary policy, has actually come through the pandemic financially stronger. Most companies remained profitable even though they posted large reserves. Pandemic-related loan losses have been far less than expected, and many larger banks now have excess capital, which gives them the flexibility to make loans and drive earnings growth. Additionally, banks can use their excess capital to increase dividends, buy back stock, and acquire other institutions.

As the economy continues to recover, interest rates should continue to rise and loan demand should increase, allowing companies to significantly grow their portfolios and net income.

What are the benefits of active management when investing in the Financials sector?

With bottom-up research, we seek to own a select group of companies that we believe offer the best opportunity within the Funds’ universe of 400-500 investable companies. With highly concentrated portfolios, the Funds own a fraction of the number of companies in their benchmarks. The Funds maintain concentrated portfolios, holding just a fraction of the companies in the Financials sector, which may provide the opportunity to outperform the overall sector.