Opportunities for Growth in the Financials Sector

Portfolio Managers Dave Ellison and Ryan Kelley discuss performance and valuations within the Financials sector, buybacks, record merger and acquisition activity, and how investors may be underestimating the attractiveness of investing in banks.

Would you please discuss the performance within the Financials sector?

In addition, large investment firms, such as Goldman Sachs and Morgan Stanley, and credit card companies such as Capital One, have outperformed the overall Financials sector. Many of these firms were up 50% or more year-to-date through 10/14/21. Many traditional banks have also performed well, such as Wells Fargo which was up 52% over the same time frame on a total return basis. By comparison, transaction and payment processors, including PayPal, Square, Visa, and Mastercard, returned on average just 7% year-to-date as of 10/14/21.

We believe this performance gap illustrates the importance of active stock selection as we are able to pursue the best opportunities within the Financials sector for both of the Hennessy Financial Funds.

Given the sector’s exceptional YTD performance, how do valuations look?

Even with the recent rally in Financials, the sector continues to look attractive. Banks are trading at about half that of the overall market on a price-to-earnings (PE) basis: The S&P 500® traded at 21.6x 2021 estimated earnings while the KBW Bank Index traded at 11.3x estimated earnings as of 9/30/21. Over the past 10 years, regional banks' average PE ratio has been about 79% of the PE of the S&P 500®.

One reason for the relative discount is that stocks overall are in a period of exceptional earnings growth, yet bank earnings are growing at a slower pace. From 2019 to 2022 projections, aggregate earnings per share of the S&P 500® is expected to grow 13% per year. Earnings growth for banks, while positive, is expected to be substantially lower than the overall market at about 4% per year. Yet, in a steeper yield curve environment, we believe the Financials sector looks relatively more attractive as many other sectors appear to be priced to perfection due to their strong performance during the pandemic.

What is driving the continued stock buybacks and increased dividends in the sector?

It’s been a challenging growth environment for banks over the past 15 years. Since 2007, total loans for all FDIC institutions (essentially Banks) in the U.S. have grown only 37%, yet deposits have grown 148%, which is almost four times as fast! 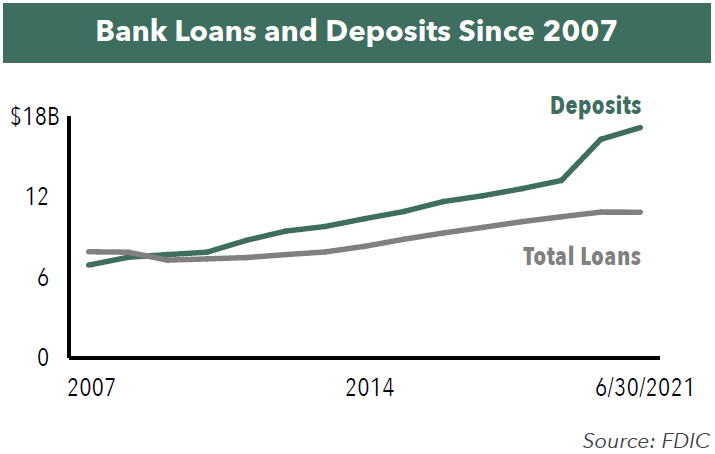 As capital continues to rise, banks can choose to pay a larger dividend or buy back stock. Once the U.S. enters a period of rising interest rates coupled with strong economic growth, we believe loan demand will increase. Until then, larger dividends and the stock buyback trend will likely continue.

Yes. Without a steady increase in loans, banks have been looking for other opportunities to grow and compete with other banks and fintech companies.

However, total deal value has been much more significant. As of the end of the third quarter of 2021, there has been $52 billion in total M&A deal value. At this pace, by the end of the year, it could total $70 billion—the highest since 2007. Unlike in past years where small banks were acquired, larger companies are being purchased in 2021. For example, U.S. Bancorp recently agreed to buy MUFG Union Bank’s core retail banking operations for $8 billion.

We believe M&A is critical for many smaller banks as they compete with larger banks and fintech companies to provide technological solutions for their customers. Some smaller banks do not have the capital to offer high-end digital products and services compared to their larger peers. We believe certain smaller banks will either need to bear the costs of implementing the technology themselves or consider being acquired.

How might investors be underestimating the attractiveness of investing in the Financials sector?

We believe investors may underestimate the significance that an uptick in interest rates could mean for the sector, especially for smaller banks. The net interest margin (NIM), which is the difference between income generated from loans and the cost of funds, is a fundamental part of a bank’s earnings stream. Approximately 75% to 80% of smaller banks’ revenues come from NIM. Therefore, if the U.S can achieve normalized rates, such as a Fed Funds rate of 1-2% and mortgage rates at 4-5%, it will likely result in significant profit growth. Notably, higher inflation than we’ve seen recently may force the Federal Reserve to increase rates, which should have a significant impact on margins.

In addition, banks remain financially healthy. From an asset quality perspective, in 2021, annualized net loan charge-offs at commercial banks were 29 basis points through 6/30/21, which is the lowest amount in at least 30 years.