Opportunities in the Financials Sector as Interest Rates Rise

Portfolio Managers David Ellison and Ryan Kelley discuss banks’ net interest margins, their performance compared to the overall market, where they are seeing opportunities for both Funds, and their outlook for the Financials sector.

Since the Federal Reserve began hiking rates in March 2022, the market has quickly moved from historically low rates to a trend of rising rates. With five increases, the fed funds rate has risen from 0.25% to 3.25% as of September 2022, and rising rates should help banks expand their primary source of revenue, namely their net interest income.

Importantly, over the long term, the change in rates also helps expand banks’ net interest margins (NIM), which is the difference between income generated from loans and the cost of funds. In 2021, the average NIM for U.S. commercial banks was 2.47%—the lowest going back to 1991. Since then, margins have gradually risen along with rates, with the initial move positively impacting the adjustable rate loan portfolio. As expected, the average NIM in the second quarter was higher than first quarter’s, which was also higher than 2021’s. Investors should keep in mind that NIMs are moving in the right direction, albeit slowly.

Would you please discuss the performance of the banking sector over the course of the year and since the rate hikes?

From the pandemic low on March 23, 2020, to September 30, 2022, banks outperformed the overall market. On a total return basis, the KBW Bank Index of large publicly traded banks rose 84% and the KBW Regional Banking Index increased 116% on a cumulative basis. By comparison, the S&P 500 Index® was cumulatively up 67% over the same period. 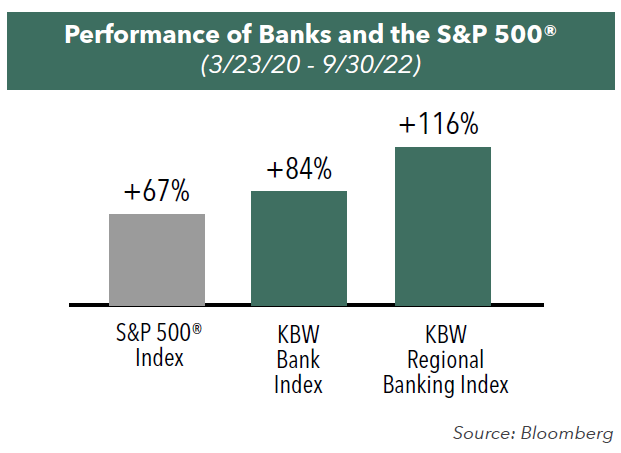 Throughout this time frame, banks have had periods of under- and outperformance versus the broader market. In 2020, banks lagged many large tech stocks but rebounded throughout 2021. In 2022, large-cap banks have lagged the S&P 500 by a small amount, nearly following the same pattern as the overall market this year.

How do bank valuations compare to the broader market and historically?

We believe bank valuations look attractive relative to the overall market and to historical valuations on a price to earnings basis. As of September 30, 2022, the KBW Index of large banks traded at 8x 2023 earnings and the KBW Index of regional banks traded at 9x 2023 earnings compared to the S&P 500’s 15x. This equates to banks trading at almost a 50% discount to the S&P 500. In addition, as of the end of the third quarter of 2022, banks traded on a price-to-earnings basis around 60% of where they have traded on average over the past 10 years.

Although banks are priced at a discount, we continue to see earnings growth. From prior to the pandemic in 2019 to 2023 estimates, earnings for the banks in the KBW Bank Index are projected to grow 34% on average, which is about a 7.6% per year growth in earnings per share.

How is the Hennessy Large Cap Financial Fund currently allocated?

The Fund has a flexible mandate to invest in any financially related sub-industry, and as of September 30, 2022, approximately 85% of the Hennessy Large Cap Financial Fund was invested in traditional banks, which is a change from prior years.

At the end of 2020, the Fund had about an equal weighting in bank stocks and non-banks, which included payment processing companies and financial technology companies. Since then, we have been gradually finding banks more attractive.

During this time, many diversified financials and fintech companies were taking market share from traditional banks and competing with each other. For example, for many years, there were only three major players in the payment processing business—Mastercard, Visa, and PayPal—yet, over the past five years many new competitors have entered the space and have pressured margins.

With rising rates and more volatility in the market, the Fund has moved to own more traditional banks that can take advantage of rising rates and the growing value of their deposit franchises. For the Fund, we tend to look for those banks with a conservative lending culture, high-quality deposits, well-capitalized and well-structured balance sheets, sustainable earnings, and book value growth along with those banks that have had solid performance throughout past cycles.

Where are you finding opportunities for the Hennessy Small Cap Financial Fund?

In an uncertain economic environment, similar to the Hennessy Large Cap Financial Fund, we believe conservatively run banks represent a better opportunity for the Hennessy Small Cap Financial Fund. Specifically, we seek regional banks that are able to fund themselves with core deposits, have strong balance sheets, a solid deposit franchise, and a more loyal customer base.

What is your outlook for the Financials industry over the coming months?

The Financials sector is currently in a transitional phase as rates have risen quickly. It will take some time to positively impact book value and significantly increase margins. Yet, in terms of earnings growth and credit, the overall sector is healthy. There have been 10 years of stress tests that assess whether banks have sufficient capital to withstand an economic shock. In general, the banks have passed these stringent tests, which gives us confidence that many banks’ balance sheets are strong enough to weather an uncertain economic environment. Given time, we should see meaningful NIM expansion and earnings growth, as long as deposit costs rise less quickly than loan yields, which should continue to bolster investor interest in Financials.