The Resiliency of Natural Gas in Challenging Environments

The Portfolio Managers of the Hennessy Gas Utility Fund discuss the role of natural gas during the recent extreme cold weather event, the demand dynamics of natural gas since the pandemic started, infrastructure and modernization programs, and the growth of the global liquefied natural gas (LNG) market.

What role did natural gas play in meeting energy demand during the recent extreme cold weather event in the U.S.?

In February, an arctic air mass descended across much of the U.S., with all but six states experiencing colder than normal temperatures. The weather in Texas, Louisiana, Oklahoma, Mississippi, and Arkansas was twice as cold as normal, as measured by heating degree days. The result was an all-time, two-day record for natural gas deliveries on Feb 14-15. In Texas specifically, demand for natural gas for power generation, residential, and commercial use jumped by over 150% on those days. While production decreased by roughly 20% due to freezing temperatures, the natural gas system remained reliable and resilient as service from natural gas utilities directly to customers was largely uninterrupted.

How has the demand for natural gas been impacted by the pandemic?

In total, U.S. natural gas consumption declined only 2% year-over-year as of November 2020. With the work-from-home trend over the past year, residential demand for natural gas remained strong. While demand from commercial, industrial, and manufacturing customers declined due to the imposed shutdowns, this has begun to rebound and should continue to recover with continued reopenings.

The operations of the natural gas industry overall, and utilities specifically, have remained resilient through the pandemic. Delivering energy to markets and to the homes has been critically important, and field personnel at utilities were deemed essential and continued the work that needed to be done to deliver reliable and uninterrupted service.

How has the pandemic affected infrastructure programs within the natural gas sector?

Infrastructure investments and modernization programs tend to be long-term projects, some spanning decades. Many natural gas distribution companies are still working to replace older cast iron pipe systems, and they have continued their progress throughout the pandemic. For the safety and the well-being of the environment, some state commissions wanted to see these projects accelerated and made exceptions to allow companies to continue working. As a result, these long-term infrastructure, pipeline safety, and modernization projects proceeded as planned in 2020, with approximately $36 billion invested through gas utility construction expenditures. 2020 outlays were even higher than 2019’s expenditures, and investment looks to be strong in the years ahead.

How important is U.S. liquefied natural gas (LNG) to the global market?

Worldwide demand for natural gas has lifted the prospects for the global trade of LNG. 2020 began with record levels of natural gas volumes to LNG export facilities. Volumes declined significantly over the summer due to pandemic-related disruptions and the limited need for LNG globally. However, demand picked back up in the winter months, and U.S. LNG feedgas for export reached record levels as 2020 came to a close.

Looking ahead, the abundance of natural gas puts the U.S. in an important position to help meet growing global demand. We believe the U.S. will continue to grow its share of global LNG supply and will be a substantial component of the global energy mix for years to come. In fact, U.S. LNG exports could more than double over the next decade.

Would you please describe the composition of the Hennessy Gas Utility Fund?

Over time, the Fund’s exposure to the electric and multi-utilities has increased and exposure to midstream/pipeline companies has decreased. In addition, many of the holdings have become more diversified in their business lines partly due to merger and acquisition activity over the years.

Given the growing interest in renewables, what is the Fund's exposure to renewable energy sources?

Many of our portfolio companies are producing power with renewables. Approximately 65% of our portfolio companies produce electricity, with about 90% having some mix of solar, wind, or hydroelectric generation. Renewables have become a greater focus for the electric and multi-utilities over many years, and we are increasingly seeing utilities announce carbon neutral initiatives and large investments in renewables. For example, Consolidated Edison, a 200-year-old gas and electric company, is now the seventh largest producer of solar power in the world and the second largest in the U.S.

Looking ahead, we believe most of the electricity consumed in the U.S. and globally will be produced from a combination of renewables and natural gas.

Would you please discuss your view on valuations and the importance of dividends? 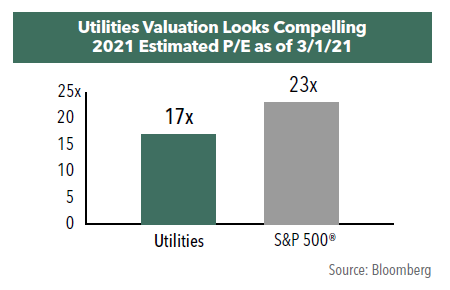 1. Arithmetic average dividend yield is calculated as the sum of all dividend yields divided by the count of that series of numbers.