Energy is a large and complex sector. The sector’s broad sub-industries can be divided into a “value chain,” each segment of which has different characteristics and offers different investment opportunities.

At one end of the Energy sector’s “value chain” are the “upstream” companies. The upstream segment includes exploration & production (E&P) and oil-field equipment & services companies that are engaged in the search for, and production of, crude oil and natural gas. Upstream companies’ profits tend to be highly correlated with commodity prices.

Downstream companies refine crude oil and market the finished products, such as gasoline and jet fuel, to customers in the U.S. and abroad. Profits from downstream business also tend to be relatively well-insulated from commodity price fluctuations.

At the other end of the energy value chain are the “end users.” These are companies that use energy products intensively in their operations, either as a fuel or a feedstock. The price of energy can have an important effect on the competitiveness of these companies.

The largest segment of the Energy sector is comprised of Integrated Oil & Gas companies, sometimes referred to as “supermajors,” which have operations across all parts of the energy value chain. Examples of these companies include Exxon Mobil, Chevron, or BP. Balanced by its upstream and downstream operations, an integrated oil and gas company may have less concern about commodity price volatility.

Renewable energy, once a niche segment, is rapidly becoming an important source of energy in the U.S. and globally as climate concerns increase and innovation brings costs down. Companies within the sector provide clean and renewable energy, including solar, wind, hydroelectric, biomass, and geothermal. Renewable energy sources are expected to represent a growing share of the global energy mix over the next several decades.

Opportunity Up and Down the Value Chain

The portfolio managers of the Hennessy Energy Transition Fund have the flexibility to opportunistically move up and down this energy value chain, and, depending on the outlook for each segment, overweight the areas they believe will generate the best returns.

Over time, the percentage of the Fund invested in different segments of the value chain has fluctuated significantly. For example, in mid-2014, only 29.1% of the Fund was invested in upstream companies, whose profits are highly correlated with the price of oil. As a result, the Fund was relatively well insulated from the effects of a decline of over 60% in the price of oil over the subsequent nine months. In contrast, in March 2016, the Fund had an almost 60% weighting in upstream companies and benefited from the almost 40% increase in the price of oil over the subsequent nine months. In early 2020, crude oil prices plummeted on-demand softness associated with the Covid-19 pandemic. However, later in the year, the emergence of numerous vaccines and the anticipation of global economic rebound prompted a move to the upstream sector which ultimately reached nearly 2/3rds of the Fund by year-end.

In 2020, the Fund began investing in renewable energy, with 20% of the portfolio invested in renewables by September 2020. Recently these companies have traded at lofty valuation levels and have had difficulty executing on their operating plan due to rising raw material costs and supply chain issues. We continue to seek opportunities in renewables, yet better investment merit currently lies in traditional hydrocarbon Energy companies. 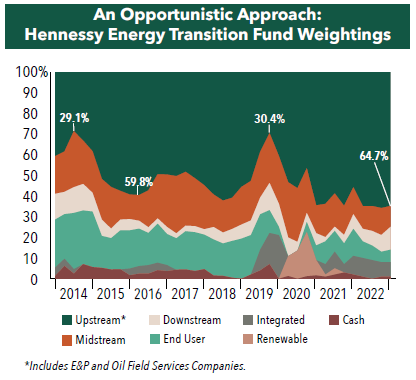