An increase in cycling enthusiasts and the COVID-19 pandemic have created a surge in demand for bicycles. With a long-established history of quality manufacturing, Shimano is well positioned to benefit as the preferred part manufacturer for the global bicycle industry.

A Big Name in the Bicycle Business

Shimano designs, manufactures, and distributes a range of sporting goods, deriving 80%1 of its income from its bicycle parts division. As the dominant industry leader, the company has used the latest advancements in technology and precision manufacturing to achieve over 70% of the global market share for bicycle parts such as brakes, pedals, and drivetrains. The company has a favored position among top-tier cyclists who compete in races such as the Tour de France, providing Shimano with both professional endorsements and strong brand loyalty. In addition, the company is the second largest manufacturer of pedal-assisted electric bicycle (“e-bike”) components, including motors and batteries.

Unlike other manufacturers, Shimano uses precision fabrication methods to produce individual components, instead of completed, ready-to-ride bicycles. The company has a reputation for superior products, offering lighter, stronger, and longer-lasting parts, giving users an edge in a sport where the difference between first and second place can be measured in fractions of a second. This reputation is crucial for a sports-product business, as customers tend to be brand loyal and create strong replacement demand as they wear out products. Additionally, the company is increasingly working to integrate digital technology, with designs for on-board-diagnostic sensors and cycling GPS computers integration in development.

The onset of the COVID-19 pandemic in 2020 has caused a surge in demand for bicycles and parts as the imposition of restrictions on fitness centers, increase in remote work, and general shelter-in-place orders spurred an increase in cycling. At the height of quarantine measures in the U.S., bicycle and accessory sales topped $1 billion for the month of April 2020, the highest recorded total for a single month and a 75% increase from the previous April.2

This trend was not exclusive to the U.S., as the U.K. saw a 57% increase over its prior year sales through July, and Japan’s largest bike shop chain, Asahi, reported that bicycle sales for the month of June increased by 43% compared to bicycle sales in June 2019.3 Of specific note was the substantial increase in the sale of bikes under $200, which grew 200% year-over-year, and in children’s bikes, which climbed 107%.4 These categories, traditional entry points for those new to cycling, highlight the strong demand that is expected to grow the $29.2 billion global bicycle market to an estimated $34.6 billion by 2027.5

Growth of the E-bike Market

E-bikes are quickly becoming a significant part of the global bicycle market. As the global population becomes increasingly urban, e-bikes offer an environmentally friendly, healthy, and socially distant alternative to public transportation. With faster speeds than traditional bicycles and less effort required, e-bikes are quickly becoming popular with workplace commuters and for short-distance trips. Improvements in lithium-ion batteries, attractive pricing, and increased power should help to increase e-bike sales by more than 130 million by 2023, for a total of 300 million e-bikes globally.6 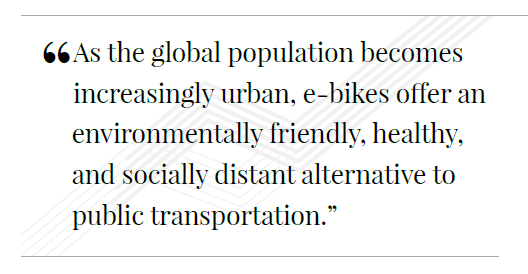 This tremendous shift to e-bikes has already begun. In the Netherlands, where nearly 25% of the population reports using a bicycle daily, nearly half of all bike sales in 2018 were electric bikes.7 In Germany, 1.36 million electric bikes were sold in 2019, accounting for 46% of the country’s total bicycle sales.8 The phenomenon is not exclusive to Europe, as U.S. e-bike sales grew 51% to $207 million from September 2018 through September 2019.9

Increasingly, governments around the world are supporting the widespread shift towards cycling as a healthy and effective way to travel.

•    In May, the need for more socially distant transportation prompted the U. K. to announce a $2 billion plan to improve cycling and walking paths.10

•    In France, the reelection of Paris Mayor Anne Hidalgo in June 2020 has also been seen as win for cycling, as part of her reelection platform consisted of plans to significantly reduce the number of parking spaces for cars to encourage walking and cycling in the French capital.11

•    In 2017, the city of Xiamen, China, unveiled its “bicycle skyway,” a nearly five-mile long bicycle-only highway suspended 17 feet above its streets.11

•    In Japan, cyclists can store their bike in a fully automated underground bike parking that uses a key-card system.12

Additionally, countries such as India and South Korea have started hosting their own cycling tournaments in the style of the Tour de France, in hopes of increasing the popularity of the sport. In the U.S., the House of Representatives passed an infrastructure package in July that included the Bicycle Commuter Act, which would reinstate and expand commuter benefits to cover electric bicycles and bikeshares up to $54 per month to encourage cycling among commuters.13

Given the company’s strong financial position, projected growth path, and position as the global industry leader, we believe Shimano represents the highest level of managerial and operational excellence. While we have long been optimistic about the company’s prospects, the recent uptick in global sales triggered by the COVID-19 pandemic and growth of the e-bike market has provided Shimano with a wealth of opportunities to capture market share and contribute significant value to its shareholders. As such, we believe Shimano is an excellent long-term holding within our portfolio and we continue to anticipate exceptional performance moving forward. 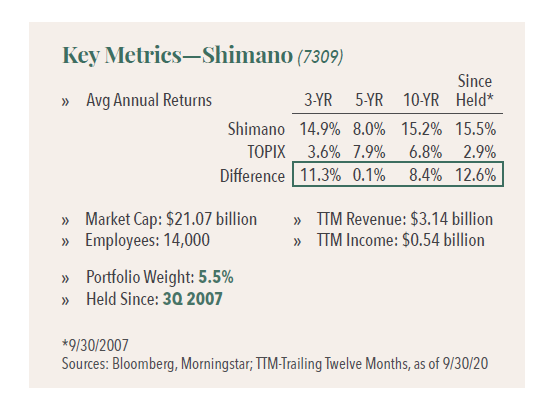 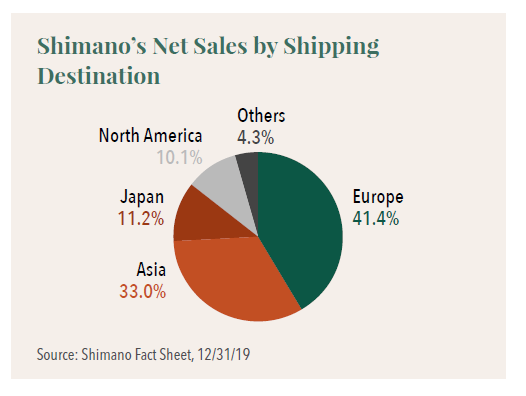