Would you please discuss the Japanese government’s response to the ongoing pandemic?

Like many other nations, Japan is grappling with the Delta variant and is focused on vaccinations, which are currently at about 50% of the Japanese population. The Japanese government has remained adamant against imposing hard lockdowns.

In the face of the ongoing pandemic, the government in Japan has been accommodative, growth-oriented, and business-friendly. Prime Minister Suga recently announced that he would step aside as leader of the Liberal Democratic Party (LDP) and not seek reelection. While the LDP may be favored to retain power with the new leader, even if the opposition party were to gain control in the next general election, we believe the country will remain on track. Growth is Japan’s top priority, and all parties appear to agree on that.

We are enthusiastic that the Bank of Japan (BOJ) continues to maintain its ultra-low interest rate policy, a positive for equity investments. While the BOJ scaled back its purchases of exchange-traded funds (ETF) earlier this year, up to 12 trillion yen ($120 billion) remains available to purchase ETFs from the market annually. Overall, through the use of the zero-rate policy, yield curve control, asset purchasing, and forward guidance, the BOJ demonstrates its commitment to a business-friendly monetary policy in face of the pandemic challenges.

Importantly, we believe the Fund holds an exceptional portfolio of well run, high-quality companies that possess the characteristics that will allow them to successfully implement their business plans regardless of the macroeconomic environment.

Would you please discuss your thoughts on the weakening Yen?

A weaker Japanese Yen compared to the U.S. dollar can be advantageous for globally oriented Japanese exporters and serve as a tailwind for overseas buyers. Currency fluctuations significantly affected Japanese companies for many years, but many businesses have made tremendous efforts since the Financial Crisis of 2008 to become less sensitive to currency headwinds.

Many holdings in the Hennessy Japan Fund are global exporters with foreign currency exposure. We expect our holdings to benefit from this weaker currency environment going forward. While a weaker Yen is a net positive, our focus remains on Japanese companies with high margins that will not be heavily influenced by external macro factors including currency fluctuations.

How is the Fund’s portfolio currently positioned?

The Fund’s concentrated portfolio of 28 high-quality companies continues to demonstrate consistent growth despite long- and short-term macroeconomic headwinds. The portfolio is invested in companies that demonstrate Japan’s manufacturing excellence and high-quality craftsmanship. Over the past few years, the portfolio has increasingly included innovative, asset-light technology companies that have scalable, intellectual property-based business lines.

We believe the Fund’s holdings have the advantage of robust economic moats and large addressable markets for their respective businesses. For this reason, we remain optimistic that our companies will continue to experience strong growth irrespective of the challenging macroeconomic environment.

We believe it is critical to be highly selective when purchasing Japanese securities. The Fund has an active share of 81% vs. the Russell/Nomura Total MarketTM Index, which reflects our philosophy of remaining highly concentrated and meaningfully different than the market.

How do valuations and return on equity (ROE) rates look in Japan?

On a valuation basis, Japan looks attractive especially compared to the U.S. As of June 30, 2021, the Tokyo Stock Price Index traded at 15x price-to-earnings and just 1.3x price-to-book (P/B), significantly lower than the S&P 500® Index at 4.6x. This lower P/B can be attributed to a lower ROE in Japan, which overall is approximately 7% as a result of the U.S./China trade tensions in 2019 and the pandemic. Yet, many businesses continue to work to break through the 10% watermark previously reached in 2017. Of note, the Hennessy Japan Fund portfolio ROE was 16.0x as of June 30, 2021. 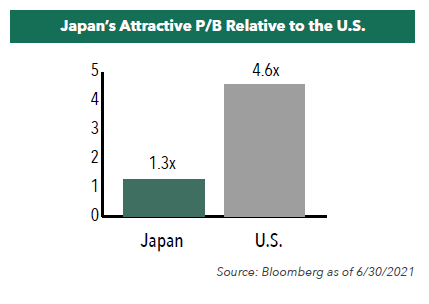 We believe the significant improvement in ROEs will be driven by macroeconomic tailwinds, an accommodative monetary policy, a benign currency environment, and, most importantly, Japan’s own effort on improving corporate governance and rising awareness of capital efficiency.

Would you please discuss a new holding?

In June, we initiated a position in Hitachi. With $60 billion in market value, it is one of Japan’s oldest electric equipment and heavy industrial machinery manufacturers. Its scope of business ranges from manufacturing of industrial machinery, home appliances, electronics, medical equipment, and more recently, the development of enterprise information technology (IT) systems, to the construction of social infrastructure such as rail systems, power plants, and building management systems.

Epitomizing Japan’s “lost decades,” Hitachi was a poorly run enterprise in the years leading up to  2008. In fact, during the global financial crisis, the company incurred the largest loss ever recorded by a Japanese manufacturer at the time.

Following the crisis, through numerous restructurings, management significantly improved Hitachi’s base-line profitability. This turnaround phase is largely complete with the quality of the company moving from “unattractive” to “average”  in our assessment.

Now, we see the company poised to advance from “average” to “excellent.” We have been observing management making a transition from a manufacturing-driven hardware sales model to a scalable solution-based model built around their proprietary industrial IoT (Internet of Things) platform called Lumada. Following our research, we have confidence the company has developed a strategy to consistently grow its profit going forward.

The stock is trading significantly below average price to earnings (P/E) with ROE in the mid-teens and a reasonably healthy balance sheet. As the business line shift progresses, we expect its ROE to improve further accompanied by above average earnings growth, increases in free cash flow, and strengthening of its balance sheet.