Masa Takeda of Tokyo-based SPARX Asset Management Co., Ltd., subadvisor to the Hennessy Japan Fund, shares his “feet-on-the-street” perspective on the recent sales tax hike, the rise in dividends and share buybacks, Japanese equities’ low valuations, and how the Fund is positioned for 2020.

What impact has Japan’s recent sales tax hike had?

Contrary to the negative reaction to prior tax hikes, Japan’s sales tax increase, which took place in October 2019 and raised the rate from 8% to 10%, has been largely uneventful. In preparation for this tax hike, the government took a preemptive approach, budgeting about $25 billion—about half of the projected increase in tax burden on households—to develop countermeasures to soften the impact. Specifically, Japan waived the tax hike on groceries and small ticket items and introduced a loyalty point program for consumers who use digital payments to save up to 5% on future purchases.

While there have been some signs of a pullback in consumption activity in certain areas, such as car sales and department store sales, the overall impact appears to be less severe compared to the last tax hike in 2014, when there was a significant decline in consumer spending.

What is driving shareholder-friendly initiatives?

Shareholder-friendly initiatives began in 2013, when Prime Minister Shinzo Abe and his government unrolled their ambitious economic revitalization plan. One major area of focus was corporate governance reforms, which led to the adoption of initiatives that encouraged constructive discussions between investors and companies for a more efficient use of capital.

As a result of these initiatives, management teams have become more focused on driving return on equity (ROE). While Japanese companies’ ROE continues to be lower than its Western peers, there is an increased awareness from corporate management to improve. In the last five years, ROE of Japanese companies has improved significantly.

With approximately $5 trillion in cash on Japanese companies’ balance sheets, we believe the trend of share buybacks and increased dividends should continue into 2020 and beyond. 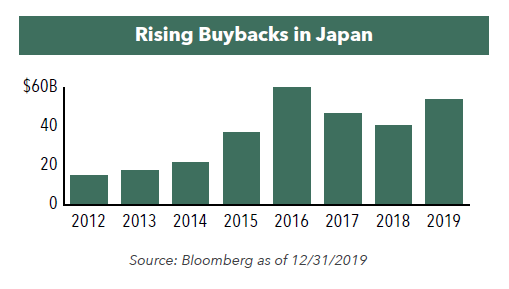 In some respects, the Japanese market’s price to earnings (P/E) multiple does not reflect the ongoing structural improvements, such as the continuous push toward improved corporate governance, and the appropriate policy mix that the pro-business government and pro-inflation, pro-growth central bank have in place. There are a number of tailwinds, including an improving global economy, low interest rates, better corporate governance, a benign currency environment, and higher labor productivity which should help Japan return to earnings growth rates of high single digits to 10% in 2020.

How has the U.S.-China trade war affected Chinese consumers’ demand for Japanese goods? How has it affected Hennessy Japan Fund portfolio companies?

To help gauge the impact of the trade war, we can look at Japan’s inbound tourist trends and the local consumer trends in China. While inbound Chinese tourism to Japan continued to be strong in 2019, spending was weaker primarily due to China’s economic slowdown and weaker currency. On the other hand, in China, demand for Japanese products remains robust. This strength has helped the Fund’s consumer stocks, such as Kao, Unicharm, and Rohto Pharmaceutical, regain ground from the recent lows in the second half of 2019. As an example, Rohto Pharmaceutical’s China segment in the most recent quarter grew between 6%-8% and domestic sales to inbound tourists also stabilized.

Tokyo will host the 2020 Olympic Games in July/August. What could be the economic impact?

The Olympic Games will showcase Japan’s many attractions, which we believe will draw in more tourists from around the world after the Games end. Over the past 10 years, the number of inbound tourists has more than quadrupled to 32 million people in 2019; tourists totaled only 7 million people a decade ago. The average tourist spends between $1,200 and $1,500, with the overall contribution to the economy totaling about $40 to $50 billion, or about 1% of the economy currently.

We believe there is significant room for increased tourism to boost the economy going forward. Should the Japanese economy boom, our Fund’s holdings should also benefit from an increase in domestic revenue.

What are the major tenets to your investment strategy for the Hennessy Japan Fund?

At SPARX Asset Management, our investment mantra is to invest in great businesses with exceptional management teams at attractive prices. We are patient investors focused on high-quality, globally oriented companies protected by high entry barriers. We prefer companies that generate a high level of cash flow and possess sustainable and predictable earnings growth over longer periods.

The Hennessy Japan Fund is a concentrated portfolio comprised of 25 holdings as of December 31, 2019. As a result of our long-term orientation, the Fund’s turnover ratio was only 12% in 2019. Although the portfolio is concentrated, it is also diversified. Within the portfolio, the top holdings span a broad range of industries, such as internet technology, medical devices, factory automation, media, bicycle parts, motor manufacturing, baby diapers, cosmetics, and retailing.

We believe the Fund is well-positioned with its portfolio of attractive companies expected to grow their earnings at a range between the high single digits to 10%+. The ROE range of our top holdings is approximately 12% to 13%, which is approximately 40% higher than the TOPIX’s ROE of 9% as of December 31, 2019. 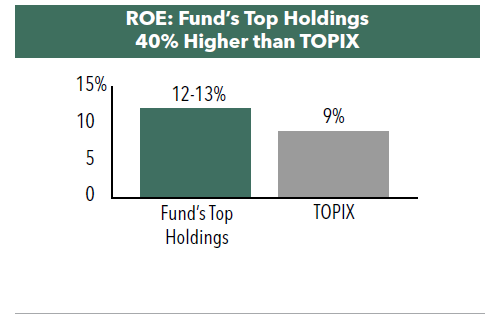