What has been driving the Japanese market in 2019?

The market-moving news has been primarily externally driven, including the U.S.-China tariff threats and the U.S. yield curve inversion. In addition, the Federal Reserve interest rate cut in July has resulted in upward pressure on the Japanese yen. Although Corporate Japan has become more resilient to currency fluctuations over the past decade, there is still a negative impact from a stronger yen since the Japanese economy depends on overseas demand for incremental growth.

The last quarter was a difficult one for Japanese consumer goods, but this slowdown was attributed to so-called ”Daigou” buyers, which are Chinese consumers who purchase Japanese products in bulk for resale in China. These buyers have historically avoided import tariffs but the Chinese government has recently tightened rules to restrict this gray area.

Importantly, we believe high-quality Japanese products remain highly coveted in China, and over the next few quarters, revenues should recover as Chinese buyers purchase these Japanese products through other sales channels.

How do valuations for Japanese equities currently look?

Overall, Japanese equity market valuations are at their lowest level in many years. In addition, valuations compare favorably to other major markets. For example, the Tokyo Stock Price Index (TOPIX) forward price to earnings (P/E) was 12.5x compared to the S&P 500® Index at 17.9x as of June 30, 2019. 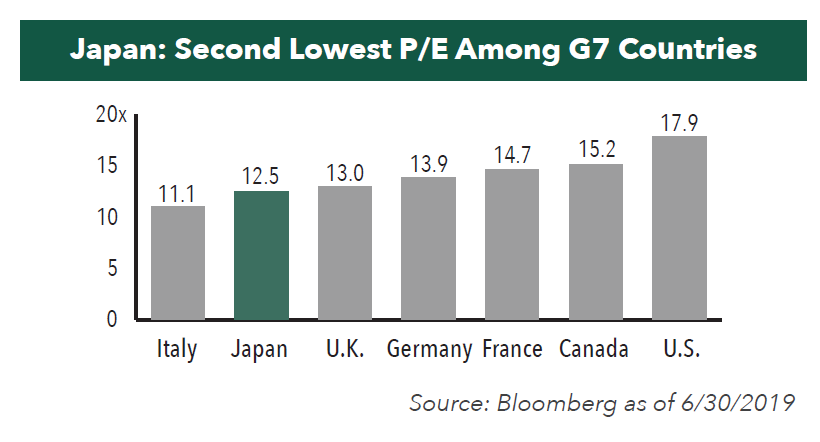 Beginning in 2013, corporate profits and stocks started rising together in lockstep. However, the two figures started to decouple in 2018. While profit growth deteriorated from the high-single digits to mid-single digits in the most recent quarter, the TOPIX dropped even more sharply from peak to trough. Therefore, at 12.5x forward earnings, we believe companies look attractive relative to their current profit growth.

With the U.S. cutting interest rates in July 2019, what is the Bank of Japan’s current stance?

Central Bank Governor Kuroda has said that the Bank of Japan would be open to easing monetary policy further to keep pace with other central banks. Therefore, the Bank of Japan will likely maintain its accommodative stance through at least Spring 2020
and possibly longer. Japan is widely seen as lacking monetary policy options due to its current negative rates. However, we believe the BOJ retains a number of policy levers to influence the economy:

How might the proposed 10% sales tax hike affect the Japanese economy?

The proposed sales tax hike from 8% to 10% is scheduled to take effect in October 2019. The last time Japan increased its sales tax in 2014, there was a significant decline in consumer spending.

Having learned from mistakes made in 2014, the Japanese government has formalized plans to minimize potential adverse effects from the October increase through counter measures designed to support consumers. For example, the government announced a new loyalty point program using digital payments, by which consumers can save up to 5% on future purchases. Another initiative is a sales tax exemption on groceries and other frequently purchased small ticket items.

We believe these planned initiatives should make this sales tax increase largely a non-event.

U.S. companies are continuing to participate in share buybacks. Is that trend occurring in Japan as well?

Definitely. In fact, Japanese companies are buying back their shares at a record pace. In 2018 announced buybacks totaled 7 trillion yen ($65B), which represented an increase of 40% over the previous year. In 2019, it is expected that buybacks could rise to 9 trillion yen ($85B), which is a year over- year increase of 28%. Corporate Japan has a tremendous amount of cash on their balance sheets, roughly $2.5 trillion in cash (excluding financial companies).

Amongst the Fund holdings, telecom and e-commerce conglomerate Softbank Group announced a $6 billion buyback in February 2019, which was the largest in its corporate history. This buyback announcement boosted its share price significantly. Kao Corp., a Japanese consumer products company similar to Procter & Gamble in the U.S., has continuously bought back shares in 18 of the past 20 years.

Would you provide an update on structural reform initiatives in Japan?

In 2018, Japan passed several labor reforms, which are currently being implemented. Multiple initiatives were introduced to help increase labor productivity and make Japanese businesses more globally competitive, including merit-based compensation for skilled workers, a mandatory cap on overtime work, and the acceptance of low-skilled foreign workers into labor-intensive industries. We believe these reforms are an important step for Japan, as the country has ranked as one of the lowest labor productivity countries among OECD (Organisation for Economic Cooperation and Development) nations.

Why should investors consider Japan and the Hennessy Japan Fund?

We believe Japan offers some of the most globally competitive companies that provide exposure to both developed and developing countries. With the Hennessy Japan Fund, we believe investors can benefit from secular growth opportunities from these regions around the world and do so with better transparency, corporate governance, and liquidity than companies domiciled in emerging markets.

We are patient investors focused on high-quality, globally oriented companies with businesses with high-entry barriers and run by smart management. We look for companies with high returns on capital, strong cash flow generation, and sustainable, above-average, and long-term earnings growth.

Japan in many ways is still a mystery for U.S. investors, whether it’s language or corporate culture. With a local presence, we understand the inner workings of Corporate Japan. Headquartered in Tokyo, SPARX has specialized in investing in Japan for the past 30 years.