How is Japan faring with the pandemic?

Like many countries, Japan experienced another wave of COVID-19 beginning toward the end of 2020. Japan, however, appears to be faring better with the virus than the U.S. Japan has a population of a little over one-third of the U.S., yet the total number of COVID-19 cases to date in Japan (approximately 300,000) is just 1-2% that in the U.S. (over 22 million). Japanese cultural norms, including bowing instead of shaking hands, may have helped mitigate the spread, and to date Japan has not implemented stringent lockdowns.

How has Japan’s economic activity rebounded?

When the pandemic started, the Japanese government swiftly implemented a stimulus package amounting to almost 40% of GDP, including private sector money. As a result, third-quarter GDP was up 23%. However, in the second quarter, the GDP declined 29%, so the economy hasn’t entirely recovered.

Japan’s unemployment rate is only at 3% due in large part to Japan’s “lifetime employment” practices. Rather than losing their jobs, many workers are accepting pay cuts.

With regard to corporate Japan, many manufacturing businesses are faring well due to increased demand primarily from China and the U.S. Domestic-oriented, non-manufacturing sectors face a deeper slump since there are about six times as many workers in nonmanufacturing.

While short-term visibility remains cloudy, as active stock pickers, we are undeterred as the macroeconomic forecast has not been an effective predictor. We believe the Hennessy Japan Fund is well-positioned as the portfolio is built around Japan’s manufacturing excellence. In addition, the Fund is broadly exposed to the global economy through our high-quality Japanese businesses.

How has the new Prime Minister impacted Japanese priorities and policies?

Prime Minister Yoshihide Suga is a close ally of former Prime Minister Shinzo Abe. Similar to Abe, Suga has made economic growth a top priority through structural, tax, labor market, and corporate governance reforms. Additionally, Suga aims to make his own mark by pursuing his policy agenda with several key initiatives. He has expressed a commitment for Japan to be carbon neutral, with zero-emissions by 2050. To this end, the government announced a $20 billion fund to assist green projects such as hydrogen technology and electric vehicle-related projects over the next decade.

Another initiative is a $10 billion budget for digital investment, since during the pandemic many Japanese businesses were ill-prepared for remote working.

Importantly, with a reform-minded and pro-growth government and a pro-business and pro-inflation central bank, the overall political environment is supportive of Japanese business.

What are the current valuations of Japan?

Japan continues to have compelling valuations. Given the difficulty in forecasting next year’s earnings, we focus on price-to-book (P/B) ratios. As of the end of 2020, Japan traded at 1.3x P/B, trailing behind many developed countries. 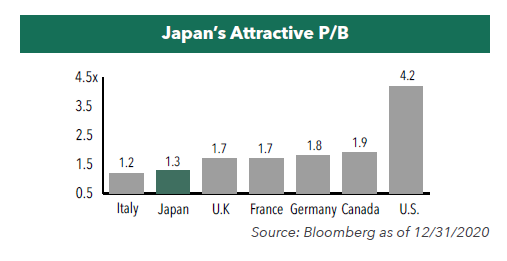 The lower price-to-book is attributed to the country’s comparatively low return-on-equity (ROE). However, we believe that a few factors point to further improvement in ROE including a continuous focus on corporate governance reforms and more awareness around companies’ use of capital.

In terms of stock market performance in relation to corporate earnings, the Tokyo Stock Price Index (TOPIX) and earnings per share both have risen by approximately 140% since the start of Abenomics back in 2013 through the end of 2020. One could argue that the current market has priced in a full recovery, elevating the importance of individual stock selection. With the Fund’s active share of over 80%, our performance may not mirror the overall market trend.

With a rising interest in environmental, social, and governance (ESG) investing, how do these considerations affect your evaluation of companies?

ESG is an important consideration in our research process and, as a United Nations Principles for Responsible Investing signatory since 2018, we take this issue seriously. As a rule, we do not invest in companies that have negative social impacts such as tobacco or weapon manufacturing businesses.

The Fund has been a long-term owner of many ESG-positive businesses. As a few examples, Nidec, which produces next-generation drive technologies, Daikin, the energy-efficient air conditioner maker, and Shimano, which is in the bicycle parts business, are three environmentally friendly businesses. In terms of governance, Sony is well-known for the diversity of board members and gender equality.

What is your near-term outlook?

Recent news about COVID-19 vaccines is quite encouraging, yet regardless of vaccine hopes, the world may slowly learn to live with the virus. Therefore, the upside potential of economic recovery may be higher than the downside risk of further deterioration. While some industries may be permanently impaired, there will always be businesses that will thrive. We believe the Fund owns the latter type of businesses.