Japan: An Island of Value and Potential Opportunity

Many current catalysts drive our positive outlook on Japan: Pandemic-related restrictions have been easing, Kishidanomics is underway, and valuations look attractive.

»    A vigorous vaccination plan and near-universal masking are helping push the nation past the pandemic.
»    New Prime Minister Fumio Kishida is an establishment candidate widely expected to deploy similar measures to Abe’s.
»    A continued weakening of the yen could benefit global Japanese exporters.
»    A small allocation to Japan may be able to improve investors’ risk-adjusted returns within an international equity allocation.

In August 2021, Japan was experiencing more than 20,000 COVID infections per day, representing its worst caseload since the beginning of the pandemic. By December, Japan aggressively reversed course for the better, as infections have dwindled to about 100 per day. A vigorous vaccination plan (more than 78%1 of Japan is fully vaccinated) and near-universal masking are helping push the nation past the pandemic and instilling confidence in a sustained recovery to pre-pandemic life.

Another positive step was when Japan lifted the coronavirus state of emergency on October 1, 2021, to gradually ease restrictions, slowly bring back social and economic activities, and help rejuvenate the economy.

These symbolic milestones demonstrate Japan’s growing confidence and advantaged position relative to other countries in Asia and Europe that continue to suffer reopening setbacks related to the pandemic.

Japan’s long-ruling Liberal Democratic Party chose Fumio Kishida as Prime Minister in September, replacing Yoshihide Suga, a disciple of Shinzo Abe, who was a relatively short-lived and unpopular. Abe, also a Liberal Democratic Party member, was Japan’s longest serving Prime Minister and architect of the ambitious economic program dubbed “Abenomics” that centered on aggressive and unprecedented monetary easing, fiscal stimulus, and structural reforms. As noted below, Abenomics was promoted as a way to help shake Japan’s economy out of a period of minimal growth and overall deflation. 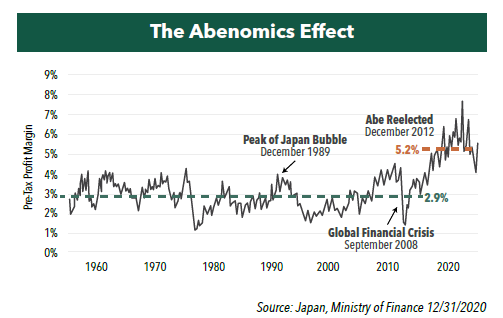 Kishida is an establishment candidate and is widely expected to deploy similar measures to Abe’s. Already, Kishida has publicly signaled his intentions to promote the country’s continued recovery with his support for “tens of trillions of yen” in stimulus by year-end. Kishida has also suggested continuing the Bank of Japan’s ultra-easy policy regime. “Many countries are signaling that they will maintain expansionary fiscal and monetary policy steps for the time being. Japan must not fall behind.”2

From 2002 to 2018, the Return on Equity (ROE) of Japanese stocks rose from 5% to nearly 10% in 2018, as longer-term structural reforms took hold. The positive impacts of Abe’s reforms – labor market, corporate governance, corporate focus on profitability – have been increasingly reflected in Japanese share prices. On September 14, 2021, the Nikkei Stock Average closed at 30,670.10, achieving its highest point since August of 1990.

Compared to other developed equity markets around the world, Japan stands out. As we’ve previously noted: 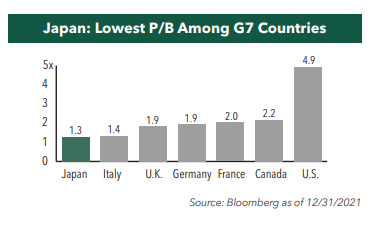 Another potential catalyst driving Japan’s positive valuation outlook is the country’s earnings revision trend relative to other markets. According to Charles Schwab, “Japan’s companies have the best upward earnings revisions trend of all major countries. The brighter growth outlook for Japan is showing up in analysts’ earnings estimates. There are currently 1.93 upward revisions for every downward revision, well ahead of the 1.42 in the United States.” 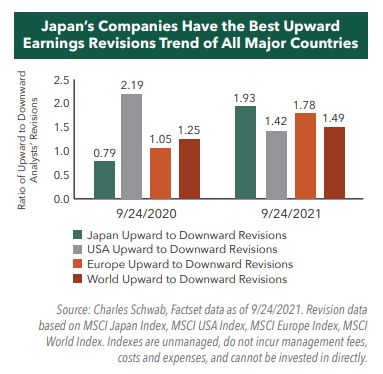 Furthermore, a continued weakening of the yen could benefit global Japanese exporters. This optimism should be tempered by potential supply chain issues that could hurt exporters as lingering effects of the pandemic. In this case, focus will turn toward more domestically oriented small cap names that should more directly benefit from a local recovery as well as stimulus measures that will drive consumer spending higher.

Gain from the Active, Local Perspective of SPARX

In-country (Asian) presence and proprietary “feet on the street” fundamental research are critical to consistently identify attractive, long-term opportunities in Japan. SPARX Asset Management, sub-advisor to the Hennessy Japan Funds, was founded in 1989, and today is the largest independent investment manager in Asia. SPARX’s local presence and deep understanding of the nuances of Japanese business and culture provides a unique ability to uncover “hidden opportunities” that other investors may miss.

For many U.S.-based investors, Japan may be underrepresented in overall international portfolios. A small allocation to Japan may be able to improve risk-adjusted returns within an investor’s international equity allocation. Japanese equities also afford investors the ability to gain economic exposure to faster growing emerging markets with the stability and transparency of a developed home country.