Portfolio Manager Tad Fujimura shares his thoughts on the new Prime Minister, the global supply chain issues, areas of opportunity for the Fund, notable changes in the portfolio, earnings growth, valuations, and the outlook for Japanese domestic companies.

What is your opinion about the policies of the new Prime Minister and how do you believe investor sentiment has been impacted?

Even in the Kishida administration, we have yet to see a clear policy difference from the Suga administration. Although we do not expect any drastic changes, we believe that governance should improve in line with past trends. It is likely that the government will at least place more emphasis on fiscal discipline than before and, given its extensive diplomatic experience, will strengthen its diplomatic strategy, focusing on Japan-U.S. relations. For the market, having fiscal discipline may have a negative impact in the short term, but we believe it is positive in the long term. There was talk before of considering taxation of securities transactions and wealthy individuals, but this has now been withdrawn and is not a major concern.

How have global supply chain issues impacted Japan’s export-oriented economy? If these issues persist, how might small companies be affected?

Japanese companies are promoting localization, and the impact of supply chain problems in the U.S., Europe, and other countries is relatively minor. The greatest impact will be from the suspension of parts production due to the lockdown in Southeast Asia. We believe this will be resolved in the coming year. Supply chain risks due to rising tensions in China have not yet occurred, but it is expected that supply sources will be decentralized in preparation for the future. In that case, expectations for a recovery in Japan’s small- and mid-cap manufacturing sector may increase due to increased investment by Japanese manufacturers and a review of Japan’s supply chain. Since the problems in Southeast Asia had a significant negative impact on the performance of small and medium-sized Japanese companies, we believe that the degree of recovery will be significant.

Would you please discuss any notable changes to the portfolio over 2021?

We added stocks that are expected to grow with expectations of economic normalization. One example is Sac’s Bar Holdings, Inc. It is Japan’s #1 retail chain of bags and wallets. We invested in this stock because it is still in the doldrums, although we expect a sharp recovery in demand for suitcases and other travel bags as travel resumes following normalization. In addition, we believe that the company has the potential to significantly increase its market share when demand recovers, as it is relocating to a better location, increasing floor space, and opening new stores backed by its strong financials, while retailers with weak sales are closing their stores.

Another example is Creek & River Co., Ltd., a company that provides support and assistance to professionals; although it was slow in recruiting and networking with professionals during COVID-19, it has expanded as its web-based activities have become more widespread. In the future, we expect it not only to benefit from the recovery in video and content production, but also to expand new business through collaboration among IT engineers, doctors, and creators.

Conversely, we sold food-related stocks such as Nippn Corporation, Starzen Company Limited, and Kobe Bussan Co., Ltd., which benefitted from frozen food, packaged meat, and grocery store management, respectively, due to rising demand for in-house food under COVID-19. However, we sold their shares because we believe that there is a risk that these benefits will disappear in the future due to cost increases caused by weakening the yen and a decline in demand.

What are your expectations for earnings growth rates in Japan over the near term?

With the re-emergence of infections, shortage of semiconductors, and rising prices of crude oil, steel, and other commodities, we believe the earnings growth rate for this fiscal year will be around 15%, which is lower than that of other countries. On the other hand, for fiscal year 2022, we believe that growth of more than 15% can be expected—potentially higher than other countries’ earnings growth rates.

What is your outlook for Japanese domestic companies?

Japan’s economy is on a recovery trend, but this is largely due to a recovery driven by overseas demand from the U.S., China, and other countries. Domestic demand is relatively large and sluggish but as the pace of the recovery increases and domestic demand returns, we believe small-cap stocks with exposure to domestic demand may perform well.

We believe there is the greatest room for recovery in consumer spending. However, we are concerned about the slow pace of the government’s deregulation, as well as about the slow return of people from their long-term habits of staying home. The latter may be partly due to the aging of the population, and from this point of view, we believe that the recovery will be gradual, rather than rapid as in Western countries.

In this respect, corporate earnings will also recover gradually, and although it may seem a little disappointing in the initial stages, we believe that it will be leveraged and greatly accelerated afterwards and will recover significantly from next spring. Since the Japanese tend to follow the crowd, the vaccination rate has risen above that of other countries. We believe that people are relatively open to receiving the third round of vaccination, and therefore the spread of infection should be controlled compared to other countries. In addition, the savings rate is still high, so we believe that there is a lot of room for recovery.

Would you please discuss areas of opportunity for the Fund?

We believe Japanese factory automation (FA) and robot technologies remain highly competitive, and we have increased the weighting in these stocks. As the Chinese economy recovers and investment appetite increases, FA and robot-related stocks with high Chinese exposures have performed well.

We have also increased our weighting in undervalued logistics and construction-related machinery stocks. One example is Tadano Ltd., a manufacturer of construction cranes. Although construction demand in Japan has been lagging due to COVID-19 and the Olympic Games, we believe there is high potential for recovery. In addition, huge cranes are needed for the construction of offshore wind power generation, which is growing in Japan and abroad, and we invested in this company because we expect it to be a new growth area.

How do the valuations of Japanese small-cap companies compare to U.S. small-caps?

Currently, we believe Japanese small companies look attractive on a price-to-earnings basis (P/E). as they are trading at a discount to international peers. For example, small-cap stocks in Japan are trading at less than 14x 2021 forward earnings while U.S. small caps are trading at nearly 25x. 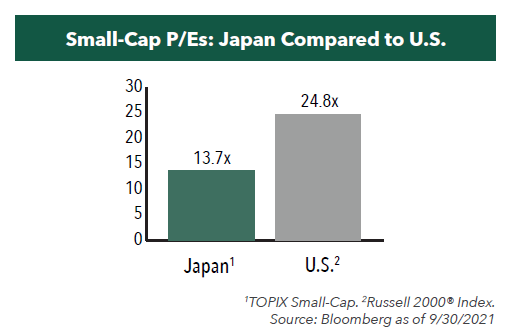