The Resiliency of Banks and Opportunities Among Non-Bank Financials

Portfolio Managers Dave Ellison and Ryan Kelley provide their perspective on how banks are demonstrating resiliency in the face of low interest rates and the COVID-19 pandemic. They also discuss opportunities in large- and small-cap Financials.

In today’s “lower for longer” interest rate environment, what are banks doing to improve earnings?

Over the past decade, the U.S. economy has been strong, yet rates have continued to fall. In 2008, the 10-year Treasury averaged 3.64%; at the end of June 2020, it was 66 basis points. As a result, the net interest margins (the difference between the cost of funds and income generated from loans) have narrowed, impacting the profitability of banks. Smaller banks have been more affected than their larger peers. About half of larger banks’ earnings come from net interest income, whereas smaller companies derive 70-95% of revenues from net interest income.

Looking ahead, consolidation and cost cutting will likely continue. As an example, over the past 10 years, the number of bank branches decreased 13%, and with the government-mandated closures, there has been an escalated move to online banking. Some branches that temporary closed this spring may be permanently shut down as banks reassess the current environment. A few large banks have acknowledged the trend, including U.S. Bancorp, the nation’s fifth largest bank, which may accelerate its plan to close 10-15% of its branches originally announced in 2019.

How are banks faring during the COVID-19 pandemic compared to the Financial Crisis?

Banks have demonstrated resilience in the face of the coronavirus pandemic despite declining net interest margins and increasing loans loss provisions. Many larger banks have seen increased fee-based revenue from trading and investment banking. For example, in 2Q20, large banks reported that fixed income trading rose 38%, investment banking fees increased 56%, and mortgage origination fees climbed 102% on a quarter-over-quarter basis. Many of these banks have used these increased revenues to add to their reserves.

Assets also grew during the second quarter, and there was a large influx of demand deposits into banks, as investors and businesses increased their cash positions.

From an asset quality perspective, banks have seen steady improvements since the Financial Crisis. In the last six calendar years, net loan charge-offs at commercial banks have been below 50 basis points—an historic low. In 2009, charge-offs were approximately 2.7%. In addition, at the end of the first quarter, only 0.58% of bank loans were classified as non-performing assets, compared to almost 3.0% at the end of 2009. 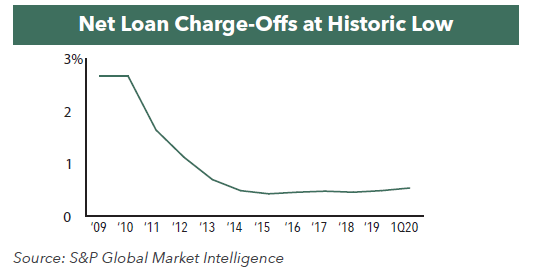 What have banks been communicating this earnings season?

As large banks reported earnings in the second quarter, many were conservative and cautious, attempting to assess the current situation with a realistic outlook and emphasizing they were strengthening their balance sheets to prepare for the uncertainty ahead. Since many investors do not expect higher earnings in this environment, banks have instead focused on building reserves and increasing their loan-loss provisions. In fact, in 2Q 2020, JPMorgan Chase, Citigroup, and Wells Fargo set aside nearly $28 billion for bad loans, the largest quarterly increase since the 2008 financial crisis. While the Federal Reserve and the government stimulus have helped reduce an increase in missed loan payments, many banks have prepared for a worst case scenario.

Where are you finding opportunities for the Hennessy Large Cap Financial Fund?

In the Large Cap Financial Fund, we are currently finding opportunities in diversified financial companies including payment processors. Non-bank companies tend to be faster growing and have less exposure to credit, the shape of the yield curve, and bank regulations compared to large-cap banks. Some of the Fund’s non-bank holdings, including Square, PayPal, Visa, and Mastercard, are benefitting from increased online transactions and payments made with a credit or debit card as many Americans continue to work and stay at home.

The increased exposure to non-bank holdings has led to significant changes to the portfolio’s allocation. In 2015, the Fund had a 60% allocation to bank stocks, and currently, it has decreased to approximately 33% of the portfolio. 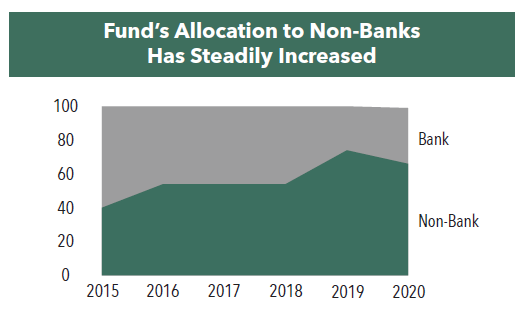 What is your perspective on small-cap banks?

We anticipate that small-cap banks will benefit from consolidation in the banking industry once the current pandemic situation improves. Mergers and acquisitions (M&A) have stalled in 2020 due to the shutdown. In fact, there have been 62 transactions among public and private banks so far in 2020, which is far lower than prior years. Over the past decade, there has been an average of 257 transactions per year.

We foresee an uptick in M&A activity as the economy reopens, presenting potential opportunity for unloved smaller banks with high-quality loans on their books and a solid local footprint.