As factory automation systems appear in factories throughout the world, Japanese companies are slated to be major beneficiaries - both as producers and users of robotics.

Japan is a global leader in the production of robots and factory automation systems. Five of the top 10 global producers are Japanese and among them, they have an estimated 30% market share worldwide.1 Japan’s current leadership in robotics was built on a long history of technological leadership in manufacturing, and today Japanese automation companies are benefiting from strong growth in demand for their products.

As the leading global manufacturer of factory automation systems, Japanese company Fanuc controls approximately 18% of the total global market share.2 The company has a significant industry footprint and has installed nearly four million computer control systems, as well as a half million industrial robots, around the world. Other Japanese companies producing factory automation products and robotics include Yaskawa Electric, Mitsubishi Electric, Omron Corp., Yokogawa Electric, and Nidec Corp. On average, these companies derive 65% of their sales outside the Japanese market, highlighting the high-quality reputation of their products, as well as their intent on being globally oriented companies.2

Worldwide sales of industrial robots have grown six-fold in a decade, rising from 60,000 in 2009 to 373,000 units in 2019. As shown in the chart below, 2019 was the third highest sales volume ever recorded.3 Asia is by far the largest end-market for factory automation products. In 2019, Asia accounted for nearly 70% of the purchases of industrial robots, led by China, which accounted for 21%. In addition, India has begun to invest in industrial robotics and has doubled the number of units operating within its factories over the last five years. According to Omdia, an artificial intelligence and robotics consulting firm, the global robotics market, including both industrial and non-industrial segments, is estimated to reach $248.5 billion by 2025, a five-fold increase from the $48.9 billion in 2019. 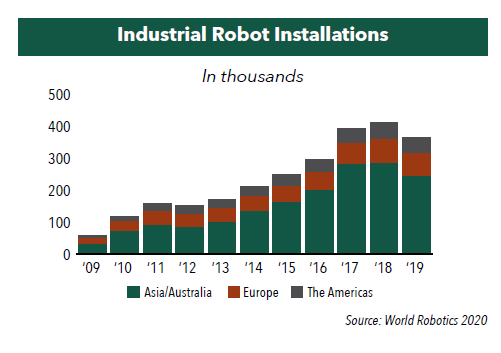 Companies in many different industries are using factory automation to transform their businesses. At one Fanuc plant in Oshino, Japan, the use of automated manufacturing to produce the next generation of industrial robots has allowed the company to reduce its human staff to only four individuals per shift. In a Philips plant producing electric razors in the Netherlands, robots outnumber the production workers by more than 14 to 1.4

Amazon, the multinational e-commerce company, now employs over 100,000 robots capable of restocking shelves and packaging merchandise in their global warehouses. This has allowed the company to shorten its training time for short-term holiday workers to less than two days, compared to the average of six weeks for full-time warehouse employees.5 Even in the financial industry, robotics and automation are increasingly being incorporated in roles from bank branches to trading floors. In a 2019 report, Wells Fargo predicts that robotics will eliminate 200,000 financial service jobs by the end of this decade.6

Demand for automation and integrated robotics continues to grow, with the World Economic Forum (WEF) estimating that by 2025 the time spent on tasks at work by both employees and machines will be equal. Additionally, while the WEF estimates that 85 million jobs will be displaced by the increase in automation and robotics by 2025, they also anticipate that 97 million new jobs may be created that are more adapted to the joint workforce of humans, machines, and algorithms.

According to the WEF’s 2019 Global Competitiveness Index, Japan ranked 6th out of 141 countries for business competitiveness, earning high scores for both technological savvy and innovation capability. Thus, to maintain their position against rapidly rising rivals such as Singapore and Hong Kong, Japanese companies are leveraging their strengths in technology and innovation to maintain their competitive edge.

As consumers shift to online purchases, Japanese companies specializing in parcel delivery and warehouse storage have found themselves in ever-higher demand and are facing a growing labor shortage due to Japan’s aging and shrinking workforce. To combat this, companies like ASKUL, a popular e-commerce platform, have made major investments in logistics robots, such as automated pallet transportation and trackless conveyance systems. Similarly, Daiwa House, Japan’s largest homebuilder and general construction company, has allocated $6.2 billion towards the development of new logistics facilities incorporating automated transport and inventory robotics through 2022.7

Moving beyond industrial warehouses and factories, Japanese convenience store FamilyMart recently displayed a seven-foot-tall remote-controlled robotic shelf-stocker and announced its intention to have them staff all 20 of its stores by 2022. Although the robot still needs a human pilot, the company can reduce labor costs by having one full-time pilot responsible for multiple stores as opposed to hiring individual shelf-stockers at each location. Additionally, greater web connectivity allows the human pilot to operate the robot from any location, providing opportunities for Japan to incorporate a greater number of foreign workers into its labor force, without subjecting them to the lengthy and difficult immigration process.

The outbreak of the COVID-19 pandemic has accelerated the demand for automation. With the imposition of quarantine measures, companies are increasingly utilizing robots to help provide a contact-less experience for consumers. Robot and technology company Seikatsu Kakumei Inc. has already begun releasing what it calls a “digital teleportation robot,” used by homebuilders to give remote tours of model homes and by restaurants to provide for contact-less waiters. These remote-controlled robots provide opportunities for businesses to continue normal operations while providing a healthy and safe environment for both customers and staff. Additionally, these robotic workers have been specifically designed to integrate into Japan’s “face-to-face” culture by providing a real-time display of the operator’s face on a tablet screen at the top of the robot. 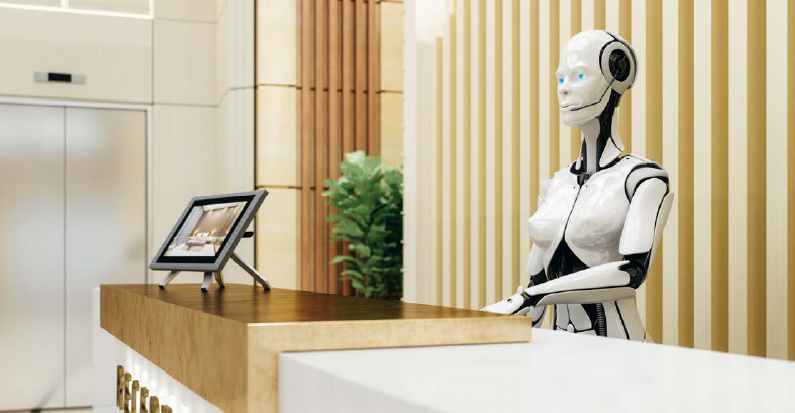 Robots are also being utilized to help those under quarantine and shelter-in-place measures alleviate feelings of loneliness. Robotics company Romotto offers the ability to easily rent a robot and receive a delivery of one of its six different models straight to the customer’s home. Its most popular models, a robotic dog and miniature humanoid robot, can be rented for $142 per week and includes free delivery and return.8

Despite the seemingly intimidating price tags, more companies have recognized that incorporating automation into their operations provides several benefits. The most obvious is a reduction in labor costs, as unlike their human counterparts, industrial robots can operate for 24 hours a day without regard to working conditions. With many industrial robots capable of running over 100,000 hours, one robot can produce the equivalent of 40 years of work by a human, operating at a higher level of accuracy and speed without a loss in precision or quality.9 In addition to increases in productivity, robots are increasingly replacing human workers performing dangerous jobs or under hazardous conditions, creating a safer workplace and reducing workers’ compensation payouts. In some cases, investment in factory automation is even helping protect jobs from being outsourced. In one example, a producer of robotic welding systems helped a U.S. customer reduce its per-unit costs to the same price it as a Chinese manufacturer, while also enhancing quality, improving process control, and reducing lead times.

We believe Japanese robotics manufacturers are well-positioned to take advantage of the rapid rise and high demand for increased automation and robotics. These long-term, global growth prospects provide
a compelling opportunity for Japanese companies to grow their corporate earnings and drive future innovations in robotics and automation technology.