Tourism is a growing industry in Japan, and it has the potential to contribute meaningfully to economic growth over the next decade as the country deregulates the industry, opens casinos, and welcomes foreign visitors to the Olympic Games in 2020.

A decade ago, few tourists visited Japan in comparison with other international destinations. However, over the past five years, the number of tourists has increased by over 24% annually, and the number is expected to continue to rise. With the average tourist spending $1,321 in Q2 2018, tourism in total currently equates to approximately 0.8% of Japan’s gross domestic product (GDP), although the broader impact is estimated to equal about 2.2% of GDP. We believe tourism has the potential for robust growth, and as it expands, its impact on overall economic growth could be significant.

The government has made tourism an important part of its goal to reach 600 trillion yen ($5 trillion) in nominal GDP by 2020. Over the last couple of years, the government has enacted a series of policy changes aimed at turning Japan into a “tourism-oriented country,” which include the relaxation of visa requirements and an increase in the number of low-cost air carrier routes. In 2018, a record 31 million tourists visited Japan, an 8% increase over 2017.1 Visitors from Asian countries continue to dominate, with tourists from China, South Korea, Taiwan, Hong Kong, and Thailand accounting for 75% of total visits in November 2018. 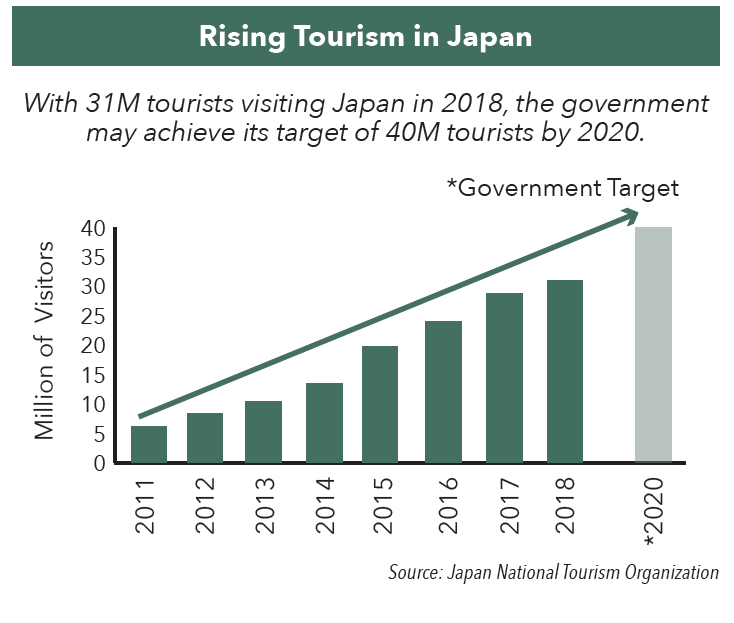 Spending by foreign tourists in the six-month period through June 2018 reached 2.24 trillion yen ($20.4 billion), up 9.3% from a year earlier. The depreciation of the yen has made Japanese goods and services more affordable to foreigners, supporting growth in spending in yen terms.2

We believe tourism in Japan has ample room to grow, as the total number of visitors remains small compared to many other countries. For example, in France, the world’s top tourist destination with 87 million foreign tourists in 2017, the tourism industry accounted for 9% of GDP in 2017. Tokyo was ranked 9th in terms of international visitor spending in 2017. However, total expenditures of almost $12 billion were still substantially lower than the $17 billion tourists spent in London or Singapore. 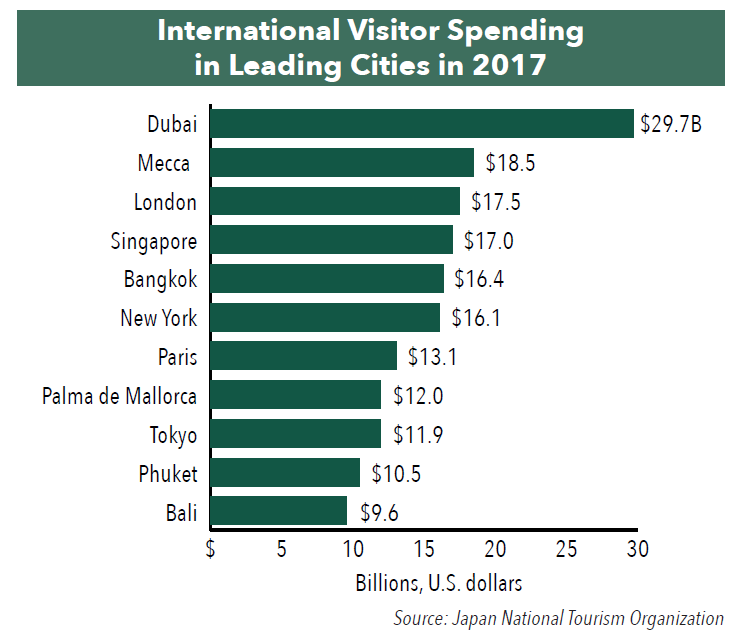 Casino resorts could further boost tourism growth. In December 2016, the Japanese parliament approved a bill to legalize casino gambling, and in July 2018 authorized the construction of three resort casinos. The first is likely to open in 2025, and total gaming revenue from all three is expected to top $12 billion. The Asia-Pacific region has become the largest casino gambling market, with revenue in Macau reaching nearly $38 billion in 2018.3 By comparison, gaming revenue in Las Vegas is expected to be about $6 billion in 2018.

The 2020 Summer Olympic Games in Tokyo are likely to be a big draw for tourists to Japan. In preparation for the games, it is estimated that Japan will spend approximately 6 trillion yen ($53 billion) on transportation infrastructure, including expanding ports, increasing airport capacity, and strengthening transportation hubs.4

The 2020 Games will provide an opportunity to showcase Japan’s technological know-how. Plans include the creation of an Olympic robot village to help guests with directions, transportation, and translation. Japan plans to impress athletes and tourists with autonomous taxis, 5G wireless technology, and superspeed magnetic levitation trains and hopes to draw visitors from all over the world, including the U.S. and Europe.5

An Opportunity to Benefit from Japan’s Growth

Both Funds are sub-advised by Tokyo-based SPARX Asset Management. As one of the largest and most experienced independent Asia-based asset management specialists, SPARX’s “feet on the street” research team provides a significant and crucial advantage for shareholders.