With a global shift to renewable energy and rising urbanization, copper demand is expected to grow while supply remains constrained. We believe copper miners, such as Freeport-McMoRan, are poised to benefit from  this trend.

The world’s energy mix is gradually shifting toward a cleaner source of fuels. With increasing climate concerns and lower costs driven by innovation, many countries around the world have accelerated their efforts to reduce carbon emissions by transitioning to renewable sources of energy, including wind, solar, and battery technologies. While the world currently only generates 11% of its electric power from wind and solar, clean energy technologies have become the fastest-growing segment of energy supply, according to the International Energy Agency.1

To encourage the use of cleaner energy sources, government policy makers have set targets and created incentives. For example, electric and hybrid vehicles represented only 9% of total vehicle sales globally in 20212, and this figure is projected to increase significantly. China has mandated that EVs comprise 20% of all sales by 2025 and 40% by 2030, and the Biden administration set a target that 50% of vehicle sales should be electric by 2030.3

Copper’s Role in the Energy Transition

Copper has superior properties compared to other metals that make it ideal for clean energy. Copper is a good conductor of heat and electricity, it can be easily bent and shaped into wires or sheets, and it is 100% recyclable. Copper is also the most efficient nonprecious conductor of heat and electricity, making energy sources that contain copper operate more efficiently.

Wind, solar, and battery technologies are mineral intensive, and among the most heavily used is copper. In fact, total demand for copper is expected to rise over 40% by 20404 because of these energy technologies. For example, electric vehicles use up to 4 times more copper than traditional vehicles.5

In addition, to charge these electric vehicles, charging station infrastructure will need to be developed, and public direct current fast charging stations use over 10 times more copper than home chargers.6

Other Uses of Copper

Copper is also used as a main ingredient in steel and is needed to construct railways and electrical grids. Copper wire is used in telecommunications, copper pipes in water supply, and copper is used in construction for cladding, electrical wiring, heating systems, oil and gas lines, rainwater systems, and roofing. In addition, its antimicrobial effect has many useful properties for the health care industry and public health initiatives.

Only approximately 50% of the world’s population lived in an urban area in 2020. By 2045, the urban population is anticipated to increase 1.5 times to 6 billion.7 As urbanization rises and populations expand, especially in countries such as China and India, more copper will be needed for the construction of cities as well as the buildout of infrastructure and communications.

While demand is expected to continue rising for copper, the supply of copper may be slow to keep pace for a number of reasons. Current inventories are low by comparable historical levels, and slow approval rates have meant longer lead times for potential new copper production capacity. As clean energy and electric vehicle sales increase, it is estimated that there could be a copper supply gap of approximately 6 million tonnes by 2032.8 For these reasons, we believe, copper prices will remained elevated over the foreseeable future.

One company poised to be a primary beneficiary of expected rising copper use is Freeport-McMoRan. 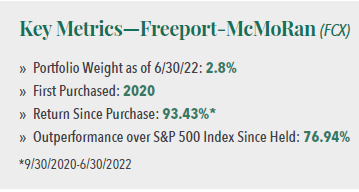 Freeport-McMoRan, a leading international mining company headquartered in Phoenix, Arizona, was established in 1988 after the discovery of the Grasberg copper and gold deposit in Papua, Indonesia. With its 2007 acquisition of Phelps Freeport, the company was transformed into a dynamic industry leader as it combined the assets and technical teams of the two companies.

Its operations in Asia, North America, and South America make up a portfolio of assets including:

•    The Grasberg minerals district in Indonesia, one of the world’s largest copper and gold deposits. From 1990 through 2019, the district produced an aggregate 33 billion pounds of copper and 53 million ounces of gold.
•    Seven open-pit copper mines and two molybdenum mines in North America. The company has significant undeveloped reserves and resources in North America, with numerous potential long-term development projects.
•    Two copper mines in South America, the Cerro Verde operation in Peru and El Abra in Chile. The Cerro Verde mine also produces molybdenum concentrate and silver. According to the company, Cerro Verde’s expanded operations benefit from its large-scale, long-lived reserves and cost efficiencies and have continued to perform well. 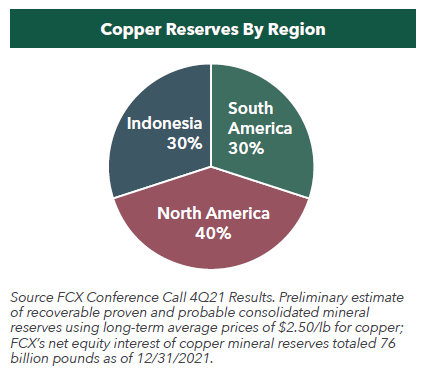 Freeport is an industry leader with size, scale, and durability. The company maintains a portfolio of high-quality copper and gold assets with embedded growth that is difficult to replicate. Freeport also has technically proficient and proven capabilities in mining with an experienced management team.

We believe Freeport remains attractive due to the following:

•    Financial Strength. The company appears to be financially strong, with a focus on deleveraging its balance sheet. Over the past 12 months ending June 30, 2022, Freeport has reduced its net debt from $3.4 billion to $1.6 billion, and going forward, the company expects to opportunistically repurchase debt in the open market. In a consistently elevated copper price environment, this position should improve cash flows, and ultimately, reward shareholders in the form of share buybacks and dividends.
•    Shareholder Interest. On a year to date basis through July 20, 2022, Freeport has repurchased approximately $1.3 billion of shares. It has also demonstrated a willingness to ramp cash returns to investors as improved financial and operational results have allowed for both a base dividend as well as variable dividend payout.
•    Compelling Valuations. The company currently looks attractively valued. On an EV/EBITDA basis, the company is trading at the lower end of its historical trading range as of June 30, 2022. 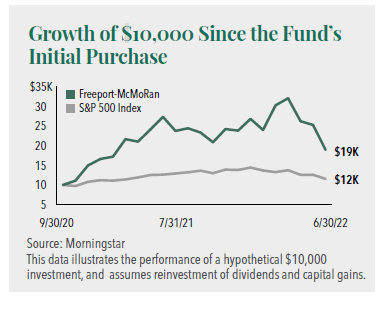 Overall, we believe Freeport-McMoRan is a high-quality business with a long runway of opportunity and well-positioned to benefit from the ongoing energy transition.