The Role of Natural Gas in the Energy Transition

With the coming energy transition where carbon emissions will be required to be significantly reduced, we believe natural gas plays a role as an essential bridge to a more sustainable and reliable energy future that will also help meet the needs of the growing global energy demand.

The coming energy transition aimed at significantly reducing carbon emissions
represents one of the most fundamental societal challenges of the 21st century.
Alongside this transition, the world will contend with a growing population and
greater demands for electrification. Today, 1.1 billion people still live without
electricity, and another 1 billion have unreliable access to electricity.

In this paper, we will highlight our belief in natural gas’ role as an essential bridge
to a more sustainable and reliable energy future. U.S. energy companies across the
natural gas value chain will likely benefit as governments, industry, and consumers
adopt natural gas as the cleanest fossil fuel and a vital complement to renewable
energy sources.

» Natural gas will increasingly be adopted and represent a growing component of the overall energy mix.

» The past decade has demonstrated how natural gas can displace relatively high emitting fossil fuels.

» Global energy demand is projected to increase by almost a third between 2020 and 2045.

» The fastest growing economies in the world—China and India—are projected to materially shift their energy mix toward natural gas in the coming decades.

Renewable energy production (e.g., wind, solar, hydro) will increase over time as production costs decrease and policy incentives (e.g., Paris Agreement, COP26) drive further adoption to meet emissions reductions and climate goals. Alongside the growth in renewables, natural gas will increasingly be adopted and represent a growing component of the overall energy mix in the coming decades. OPEC (Organization of the Petroleum Exporting Countries) predicts natural gas demand will increase over 20% by 2045, as consumers switch to natural gas from relatively high emission sources including coal.

Shift Away from Coal is Driving Secular Demand for Natural Gas

The past decade has demonstrated how natural gas can displace relatively high emitting fossil fuels such as coal. Natural gas emits between 45% and 55% lower greenhouse gas emissions than coal when used to generate electricity. Since 2010, coal-to-gas switching by consumers and industry has saved an estimated 500 million tonnes of carbon dioxide (CO2). These savings are roughly equivalent to the total energy-related emissions of all Central American countries over the same period. In the U.S., which represents the top cumulative CO2 emitting country in the world, 121 coal-fired power plants were repurposed to burn other fuels between 2011 and 2019. Importantly, 103 of the plants were converted to or replaced by natural gas-fired plants.1

The U.S. has—and will continue—to serve as a case study in successfully reducing carbon emissions. Since 2007, the U.S. has reduced carbon related emissions from coal by 6% annually, on average. Policy incentives aimed at continuing and extending this trend will benefit the full spectrum of the U.S. natural gas value chain including upstream producers, midstream players, and downstream energy companies.

In Asia, reducing CO2 emissions and transitioning hydrocarbons usage is a priority as overall energy demand is expected to increase nearly 50% by 2050, and the number of people in the region will grow by more than 900 million. The world’s leading annual CO2 emitting country in the world, China, has recognized the importance of reducing its emissions by pledging to achieve carbon neutrality by 2060 and ensuring renewable energy sources account for 25% of total energy consumption by 2030. One major component of the government’s emission reduction strategy has been policy support aimed at shifting away from coal and toward natural gas (roughly two-thirds of China’s energy consumption is derived from coal). OPEC predicts China’s reliance on natural gas will double  by 2045.2

Natural gas producers and exporters in the U.S. are likely to be key beneficiaries of the secular shift to natural gas. In November of 2021, China was the biggest importer of U.S. liquid natural gas, and in 2021 Chinese companies signed roughly 25 million tons per annum (MTPA) of long-term U.S. liquified natural gas (LNG) contracts. To meet this demand, the U.S. Energy Information Administration (EIA) recently forecasted the U.S. will reach record natural gas production levels in 2022 and again in 2023.3

Greater volatility and extremes in weather cycles underscore the criticality of a reliable and resilient energy infrastructure. Because intermittent renewable energy sources such as wind and solar can easily be influenced by weather, built natural gas infrastructure has the ability to support and supplement these sources in times of need. Additionally, the natural gas infrastructure has the ability to quickly respond to sudden increases in demand and can reach full output potential in a matter of minutes. Natural gas is also increasingly being used as a reliable support for hydropower by providing secure electricity supply amid insufficient rainfall conditions.

Global energy demand is projected to increase by almost a third between 2020 and 2045. Over this period, the global economy is expected to double, and the world’s population could grow by 1.7 billion people. While all energy sources will be required to sustain this level of growth, it’s clear the demand for natural gas will be broad based. The fastest growing economies in the world, including China and India, are projected to materially shift their energy mix toward natural gas in the coming decades.

Transforming the global energy mix is a societal imperative that will take place at varying cadences around the world depending on a range of factors from politics, technology, and consumer preferences.

However, one common theme across geographies will be the growing importance of natural gas as a bridge to a cleaner less fossil fuel dependent society. Key to bridging this transition will be the leading built infrastructure of the U.S. natural gas industry that has and will continue to benefit from this long-tail opportunity.  With the abundant and accessible supply of natural gas, the U.S. appears well positioned to take advantage of the opportunity. 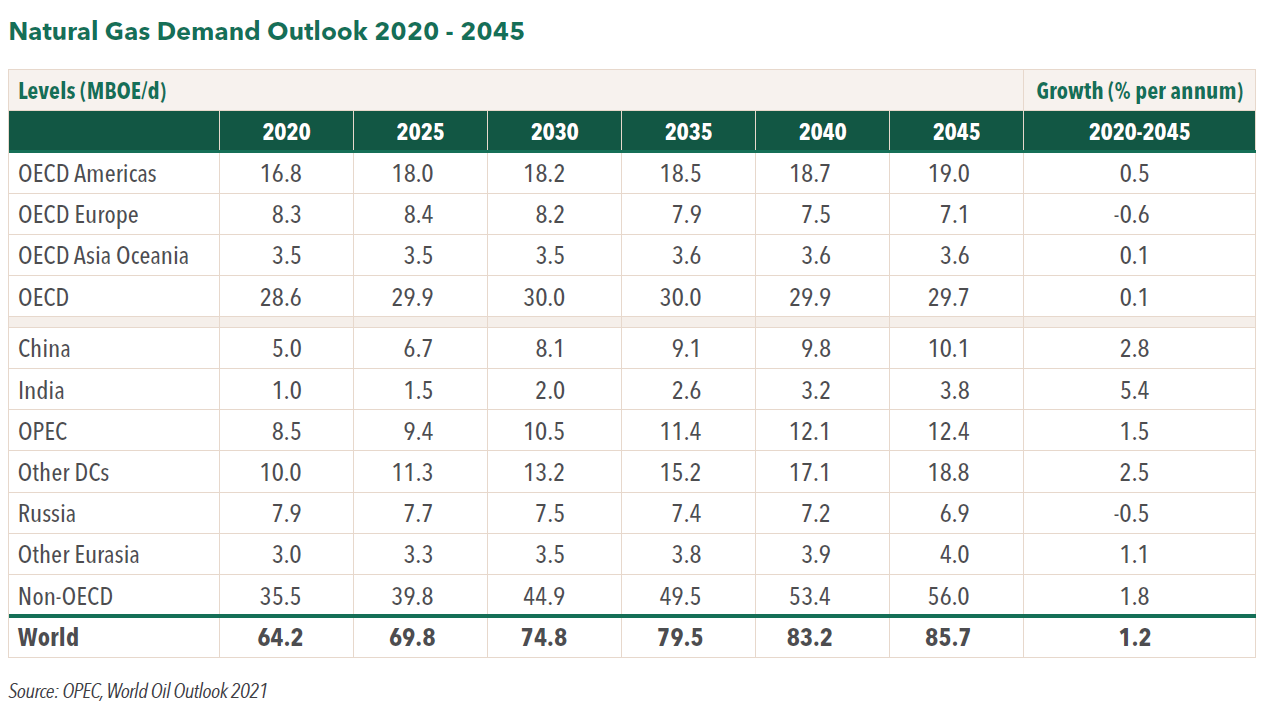 The Hennessy Energy Transition Fund invests across the full spectrum of the energy supply/demand value chain, including upstream, midstream, and downstream energy companies, as well as energy  end-users.

We believe the Hennessy Midstream Fund offers an opportunity to invest in core midstream energy companies that should benefit from the growth in production and demand for U.S. energy.