Portfolio Manager Ben Cook, CFA discusses his thoughts on how higher prices have affected the economy, the capital discipline of many energy companies, renewable energy, and valuations.

What has been the impact of the Russian invasion of Ukraine on energy prices?

Russia is a major supplier of energy to Europe. In 2020, about 70% of Russian natural gas exports went to Western Europe by pipeline and made up about 45% of the region’s import demand. At the beginning of 2022, three major arteries moved Russian gas to Europe. Any disruption could place Europe’s natural gas balance in a precarious position, particularly given that the year started with record low natural gas inventories.

From a volumetric perspective, maximum liquefied natural gas (LNG) import capacity into Northwest Europe could compensate for Russian gas flows. However, taking into consideration transit time and competition from Asia, the shipment of LNG is not an immediate substitute.

With regard to crude oil, Russia exports about 2.5 million barrels per day globally, and about 50% of oil and condensate exports are directed toward Europe.

Clearly, any impact to Russian supplies could create additional challenges as European refiners seek alternatives. As a result, oil has moved meaningfully higher as the potential for disruption has increased along with the tighter oil market due to years of underinvestment. Based on these factors, we believe the price of a barrel of oil could reach as high as $125 to $150 this year.

How have higher energy prices affected the economy and Energy companies?

Although energy as a percentage of the overall U.S. consumer price index (CPI) is only roughly 8%, oil and natural gas comprise a portion of the input costs for many other goods and services. Consequently, over the past five years, the West Texas Intermediate (WTI) oil price has had a strong correlation to CPI.

Globally, the extent to which oil prices rise becomes a function of how much demand starts to erode. Countries that are large importers of oil such as India and China will be challenged by significantly higher prices. For example, with every $10-15 in oil prices above $75, GDP could be reduced by as much as 0.25%.

In this environment, how would Energy companies deploy this increased cash?

A return of capital to shareholders has become a priority for many Energy companies. Therefore, as cash levels have risen, many companies have repaid debt at an accelerated pace. In addition, shareholder-friendly actions in the form of stock buybacks and increased dividend payouts have taken priority over reinvestment.

As a group, the hydrocarbon Energy sector is more fiscally disciplined than they have been historically as many management teams recognize the risk in overspending. Many companies also recognize  that a key to better stock performance has been
a move toward shareholder-friendly capital allocation decisions.

Importantly, over the next 12 months, oil demand could outstrip global production capacity. This trend will provide an impetus for reinvestment to grow the business. Hydrocarbon producers will likely deploy cash for reinvestment, but only after cash returns to shareholder targets have been achieved.

Would you please discuss how renewable and traditional energy companies fit together in this evolving energy landscape?

Renewable energy sources which include wind and solar power will likely play an increasing role in satisfying growing global power demand. In fact, renewable energy is expected to be the fastest growing category among the primary fuel mix for the next 10 years or so.

Yet, renewable energy growth is dependent on global policy implementation, relative cost advantage, and reliability. These factors will likely slow the pace of adoption and prolong the world’s dependence on hydrocarbons.

This trend should drive increased use of cleaner-burning hydrocarbons, particularly in the developing world which will require more power as living standards improve. As a result, natural gas is a likely companion to renewable energy due to its abundance and varied use applications, with both offering a solution to growing global energy needs.

With the Hennessy Energy Transition Fund, we seek to invest in both renewable and hydrocarbon-based companies. However, over the past several months, many renewable companies, which continue to trade at lofty valuation levels, have had difficulty executing on their operating plan due to rising raw material costs and supply chain issues. While there may be opportunity to invest in renewables in the future, we believe there is better investment merit in traditional hydrocarbon Energy companies given the potential for cash generation and the rising rate environment. 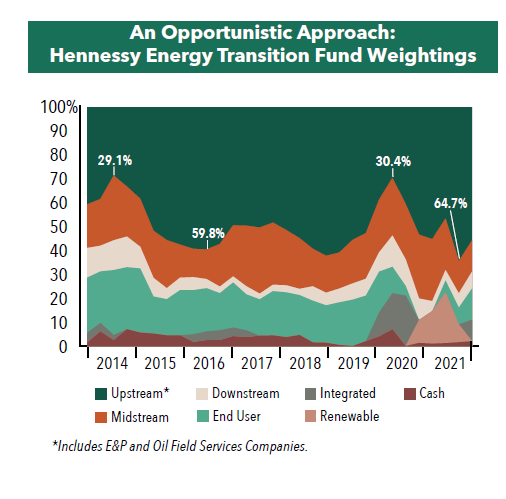 Are there any other investable areas of interest related to renewable energy growth?

Yes. There are a variety of ways to play the energy transition. For example, many renewable energy components rely on inputs such as copper and aluminum. As demand for renewable energy grows, an increased amount of raw material is needed in the manufacturing process.

With the flexibility to invest across the energy chain, the Fund has purchased copper producer Freeport McMoRan. In an environment of elevated copper prices, the company is generating higher levels of free cash flow. Looking ahead, we believe it is poised to benefit from the transition to cleaner energy sources as more and more copper will be needed.

How do valuations currently look?

The Energy sector currently looks attractively priced. Based on consensus estimates as of February 2022:

Along with these attractive valuations, we believe the solid sector fundamentals and the prospect for rising interest rates offer strong appeal for long-term investors.