Investment Opportunity as the Fed Prolongs the Cycle

Portfolio Managers of the Hennessy Equity and Income Fund discuss equity valuations, their outlook for interest rates and the bond market, and their investment case for two holdings.

What are your thoughts on current stock valuations?

Equity valuations, as measured by the forward price-to-earnings ratio for the S&P 500® Index have fallen over the past five quarters from 20x at the end of 2017 to 17x today. We believe this valuation level is reasonable and compares favorably to the 10-year Treasury bond yield of approximately 2.4%. While U.S. economic activity may slow in 2019, a tight labor market and robust household spending should offset weakness in export markets, bolstering earnings and equity valuations.

Would you discuss the common underlying characteristics of the Fund’s equity holdings?

We use a “bottom up” investment strategy, focusing on companies with high returns on capital and strong balance sheets with low debt. At the end of the fourth quarter of 2018, return on capital for the holdings in the Fund averaged 19.9% versus just 13.2% for the S&P 500® Index. For the same period, net debt to ebitda (earnings before interest, taxes, depreciation, and amortization) averaged 1.2x for the Fund’s holdings vs. 1.7x for the Index indicating generally lower levels of debt relative to earnings.

We prefer companies that allocate capital efficiently and have high insider ownership levels or incentives in place that closely align management interests with those of shareholders. Many of the companies we invest in have generated substantial cash flows because of sustainable competitive advantages. While we do not actively seek stocks paying dividends, the sort of company we gravitate to does tend to pay a dividend.

Would you explain the investment case for Nestle, a new holding in the Fund?

Nestle SA, the world’s largest food and beverage company, manufactures chocolate, confectionary items, bottled water, coffee, baby food, and pet food, among other products. The company owns many well-known brands including Nescafe, Haagen-Dazs, Purina, Coffee-Mate, and Perrier. In 2016, Nestle broke with tradition and hired a new CEO from outside the company. Since then, the company’s focus has been to raise profitability and streamline its operations by exiting non-core businesses. Although the company has some debt on its balance sheet, we believe it could pay it all down if it were to sell its 23% stake in the French beauty company, L’Oreal.

Would you discuss why the Fund recently increased its position in The Charles Schwab Corp.?

Schwab has evolved throughout the years beyond its discount broker heritage into a leading financial services powerhouse. The company offers brokerage, custody, banking, and other services to independent investment advisors and a full range of products and investment services to retail investors. Schwab has continually reinvested in technology to maintain its low-cost position, passing along savings to attract more institutional and retail customers. In addition, a new policy whereby cash balances are swept into Schwab’s bank as deposits instead of leaving them in a Schwab money market fund is helping to boost profitability. Finally, Mr. Schwab still owns 10% of the company and continues to shepherd the company with a long-term mindset. 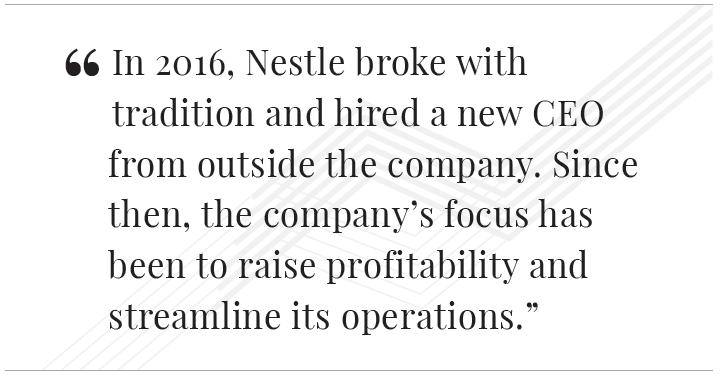 Last year, you correctly forecasted that the Federal Reserve would not have to raise rates as much as most investors anticipated. What is your outlook for short-term rates today?

We believe that the Fed will not raise short-term rates in 2019 and, in fact, is likely to cut rates before year-end as a result of slower economic growth and continued benign inflation.

The U.S. economy has been showing signs of slower activity in domestic markets such as housing and autos. Import tariffs and a slowdown in Chinese and European gross domestic product (GDP) growth have also contributed to a sharp deceleration in U.S. export growth over the last year. Despite the tight labor market, we do not think the U.S. has an inflation problem. Commodity prices are no higher today than they were in 1998 and we expect inflation to stay low as disinflationary pressures from excess capacity, the “Amazon effect,” and productivity increases continue to exert relentless downward pressure on prices globally.

We believe that if the Fed lowers rates once or twice during the second half of 2019, it can engineer a “soft landing” whereby U.S. economic growth slows down for a period before it reaccelerates, effectively prolonging the positive economic cycle by two or three years.

How is the Fund’s fixed income portion positioned and where are you finding value in the bond market today?

The Fund’s fixed income portion continues to be overweight Investment-grade corporate bonds and U.S. government agency obligations and underweight Treasury securities relative to its benchmark, the Barclays Capital Intermediate U.S. Government /Credit Index. The Fund’s fixed income duration of 3.8 years as of March 31, 2019 is comparable to the benchmark’s.

Can you explain how the Trump administration’s two major policy initiatives, import tariffs, and tax reform have affected the outlook for economic growth?

We believe the import tariffs put in place in 2018 and the uncertainty surrounding the possibility of more tariffs for both Chinese and European manufactured goods have dampened GDP growth to some degree over the last twelve months. Lower corporate taxes, on the other hand, boosted corporate profits and economic activity in 2018. Nevertheless, in our view, both higher tariffs and lower tax rates have helped make the U.S. a more attractive place for direct investment, i.e. a more profitable place to build a factory.