COVID-19 Impact on Natural Gas Demand, Utilities, and the Fund

Following the outbreak of COVID-19, analysts estimated a moderate 3-5% decline in U.S. natural gas usage through 2020. While this estimate is somewhat of a moving target, the shutdown of “non-essential” businesses has reduced demand for natural gas in commercial and industrial applications. However, the same stay-at-home measures have driven residential usage higher, and margins on residential usage are generally higher than on commercial usage.

Importantly, many of the primary demand drivers for consumption remain unchanged. Weather-related heating and cooling continue to be the primary driver of domestic natural gas consumption, and the use of natural gas to generate electricity is essential for millions of U.S. homes and businesses. The Energy Information Administration (EIA) is forecasting that annual U.S. electric power generation will decline by 3% in 2020. The brunt of the decline is expected to be absorbed by coal given its declining production and unfavorable emissions profile while natural gas and renewables will likely emerge relatively unscathed.

Oil prices plummeted following the sharp decline in demand brought on by the coronavirus pandemic, and the situation was exacerbated by an increased oversupply due to the market share war between Saudi Arabia and Russia in April.

Shale oil drillers produce natural gas as a byproduct of drilling for oil, and that “associated gas” has flooded the market in recent years, causing natural gas prices to drop to historically low levels. As oil producers decrease production in response to the sharp decline in oil prices, some of that associated gas will disappear. This should cause natural gas prices to rise, but likely remain at relatively low and competitive levels. Production decreases are expected to more significantly impact companies in the Permian and Bakken areas, whereas companies operating in other areas, such as Fund holding Kinder Morgan, should be relatively less impacted.

The EIA expects U.S. natural gas production to decline 8.8% from March 2020 to March 2021 before beginning to rise in 2Q21 as gas prices are expected to recover. 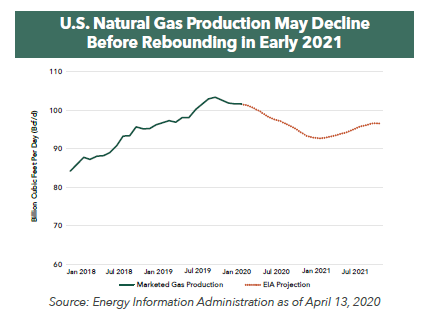 Utilities are generally viewed as “defensive” investments. How did the sector perform in 1Q20, and how do valuations look today?

Over the first quarter of 2020, utility stocks fell less than the overall market since they are generally favored as a more defensive area of the market. The S&P 500® Utilities Index lost nearly 14% compared to the S&P 500® Index, which fell almost 20% during the first quarter. Following the decline, utilities appear more attractively priced on both a relative and an absolute basis. While Utility stocks have historically traded at a premium of approximately 5-10% to the S&P 500® Index on a price-to-earnings (P/E) basis, the sector was trading approximately in-line with the S&P 500® as of March 31, 2020.

We believe the sector will continue to provide compelling opportunities for investors. Utilities tend to be financially sound companies and have been in a period of higher growth, with projected earnings per share (EPS) growth at roughly 1.5 to 2x greater than the long-term average and dividend growth of approximately 6-8% annually leading up to the coronavirus outbreak.

While we acknowledge that earnings and dividend growth may come under pressure as the global crisis runs its course, Utilities have generally weathered economic uncertainty better than many other sectors.

Would you discuss the types of Utilities companies in the Hennessy Gas Utility Fund and how they performed during the recent downturn?

Diversified and pure-play natural gas utilities comprise approximately three-quarters of the Fund. These companies derive their revenue from delivering natural gas to homes and businesses, and their performance is more closely tied to the consumption of natural gas rather than to the price of the commodity. Year-to-date through March 31, 2020, these holdings have declined an average of 14%, less than the 20% loss suffered by the overall S&P 500® Index. The current low and competitive price of natural gas should provide a positive tailwind for these distribution companies.

The remaining one-quarter of the portfolio is comprised of companies that transport and store natural gas, specifically interstate pipeline and liquefied natural gas (LNG) companies. These holdings do have exposure to the Energy sector, which has been particularly hard due to oil prices and have seen an average decline of 50% on a year-to-date basis through March 31, 2020.

Despite the exposure to Energy sector, overall the Fund slightly outperformed the S&P 500 over the first quarter, declining 19.09% compared to the S&P 500’s loss of 19.60%.

The Fund has historically provided an attractive dividend. Would you please discuss the Fund’s yield and the likelihood of continued dividends?

Currently, 44 out of the Fund’s 48 holdings have historically paid a dividend. The average dividend yield of the Fund’s holdings was 4.5%, which compares favorably to the S&P 500’s dividend yield of 2.3% (as of March 31, 2020). Due to the relatively stable revenue streams of many of the Fund’s holdings, we expect dividend payouts to remain steady for the vast majority of our portfolio companies. The average payout ratio for Utilities broadly is only slightly above long-term historic levels at approximately 60-65%.