Natural Gas Drivers in 2021 and Beyond

The Portfolio Managers of the Hennessy Gas Utility Fund discuss the trillion-dollar Infrastructure Bill, natural gas production, demand, and exportation, and the composition and dividend growth of the Fund.

What does the trillion-dollar Infrastructure Bill mean for natural gas utilities?

Many elements within the U.S.’s $1 trillion Infrastructure Bill could benefit natural gas utilities either directly or indirectly. A few components include:

2.    Grid Modernization – The Bill proposes $11.6 billion in funding for technology, including transmission lines to augment the grid’s reliability, resilience, and flexibility. In addition, $1 billion would be allocated in the next five years to modernize and improve the rural grid’s resilience.

3.     Electric Vehicles – The Bill promotes a shift toward electric vehicles (EVs) and targets $7.5 billion for building EV charging stations and related infrastructure and $6 billion to promote and advance battery manufacturing. Increasing numbers of EVs should positively impact natural gas demand as the commodity is a primary source of electric power generation.

Natural gas has proven to be resilient with plenty of production and only a small decrease in domestic demand since the beginning of the pandemic. Production of natural gas in the U.S. is on pace to set an annual all-time high, currently at 92.6 billion cubic feet per day (Bcf/d). In 2022, natural gas production  is expected to reach a new record, climbing to
94.7 Bcf/d.1

This summer’s warmer-than-average temperatures have driven higher prices and increased usage of natural gas. In March 2021, natural gas was about $2.60 per million British thermal unit (MMBtu) and rose to about $4.15 per MMBtu by August 2021. Gas volumes for July were well above 2020 levels, up almost 2 to 3% over the prior year’s period.

U.S residential/commercial and industrial demand is currently above 2020 levels. Globally, demand for natural gas is on pace to rise 3.2% in 2021 versus 2020 levels, which is about 1% above 2019 levels.

Natural gas exports from the U.S. are currently soaring. Exports via U.S. pipelines to Mexico as well as global liquefied natural gas (LNG) exports have increased significantly and are at record levels. The rise in natural gas demand from Mexico has been primarily driven by additional pipeline capacity that enables more natural gas to flow through the system. In June, exports to Mexico via pipelines were 25% higher than a year ago.

The U.S. is quickly catching up to the two largest LNG exporters in the world, Australia and Qatar. According to the EIA, U.S. exports of LNG in 2021 will be double that of pre-pandemic levels in 2019. The U.S. is currently exporting approximately 60% of Australia’s and Qatar's volumes combined. The large spread in global LNG prices is causing a significant spike in demand. Currently, LNG in Europe and Asia is above $14-15/MMBtu, significantly higher than in the U.S. where natural gas is about $4. 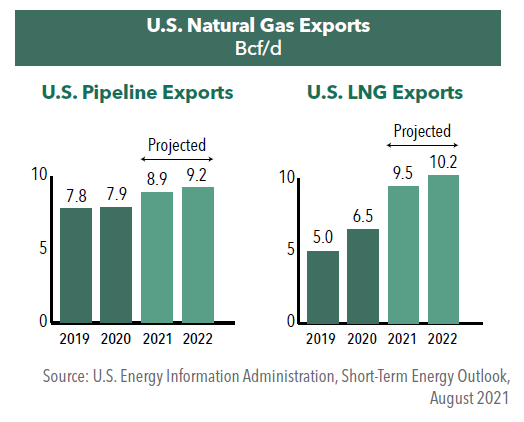 What is the current composition of the Hennessy Gas Utility Fund?

The Fund is primarily divided into three categories: electric and multi-utilities (60%). pure play natural gas utilities (16%), and Energy sector companies which includes LNG and major pipeline companies (16%). The Fund maintains significantly more concentration in natural gas distribution companies than other utility funds. As a result of acquisition activity of natural gas assets over the years, our holdings have moved more heavily into the diversified/multi-utilities sector. In January 2021, water utility company, Essential Utilities, was added to the Fund. They acquired a natural gas utility and became a member of the American Gas Association. 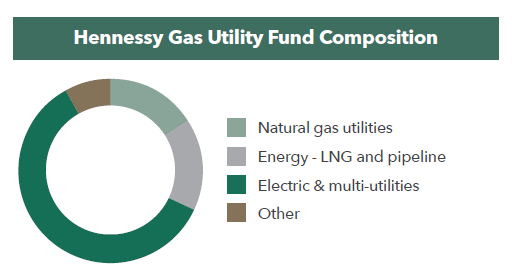 Two thirds of portfolio companies generate a portion of their total electricity from renewables including hydro, solar, and wind. In addition, 11 out of the 48 Fund holdings have some exposure to nuclear energy.

What is the dividend growth of the Fund?

Over the last three years, the overall dividend growth rate for the companies in the Fund averaged 4.4% per year, close to its historical rate. The one-year average dividend growth rate was a little lower at 3%, however, some companies were growing their dividends at 8-10%. Importantly, dividend growth of portfolio companies has been driven by growth in earnings.
As of 7/31/21, 44 of the Fund’s 48 holdings pay a dividend, with an average yield of 3.5%.2

1 U.S. Energy Information Administration. 2 Arithmetic average dividend yield is calculated as the sum of all dividend yields divided by the count of that series of numbers.