Would you please provide an update on the status of the pandemic and vaccine rollout in Japan?

While Japan continues to experience COVID-19 infections, the number of cases remains relatively low compared to the U.S. For example, as of mid-April, there were more than 10 times as many cases in the U.S. than Japan even though the population in the U.S. is only 3 times larger.

Japan’s vaccine rollout has been slower than other countries’ primarily due to regulations requiring a domestic Japanese clinical trial, even if the vaccine has been approved overseas.

We do not view vaccination efforts as critical to the performance of Portfolio companies. Many of the Hennessy Japan Fund’s holdings have actually benefited from tailwinds created by the pandemic, including Nidec, the electric motor manufacturer, and Sony, the maker of the PlayStation console. We believe these businesses will continue to thrive as behaviors that changed during the pandemic may persist more permanently.

Prime Minister Suga has set an aggressive goal of eliminating Japan’s carbon dioxide emissions within the next three decades. On a relative perspective, Japan’s renewable energy usage is lower than in Europe. Within Europe, 40% of power generation comes from renewable energy as compared to only 17% in Japan.

We believe Suga’s goal will have a disproportionately negative impact on companies within the power utility, steel, auto manufacturing, and transportation industries. Currently in Japan, the Energy sector contributes 40% of carbon emissions, Industrials contributes 25%, and Transportation contributes 20%. Historically, the Hennessy Japan Fund has avoided companies in these industries because they do not fit our investment criteria of high-quality companies with high returns on capital and attractive growth profiles.

Conversely, we see several opportunities for the Fund’s holdings to benefit from this transition, including:

Can you discuss current valuations in Japan?

At the end of Q1 2021, the Japanese market traded at 16x forward earnings estimates, in-line with other major European and Asian markets. However, Japan traded at just 1.4x price to book, significantly lower than other developed counties. 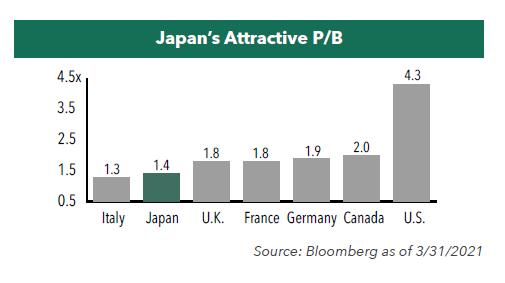 Since the start of Abenomics in 2013, the Tokyo Stock Price Index (TOPIX) has risen approximately 170%, while corporate earnings have risen 150%. One could argue that the current market has priced in a full recovery. While we do not agree with this sentiment, individual stock selection has become more important. As such, we believe the Hennessy Japan Fund’s concentrated portfolio of 27 high-quality, globally oriented stocks are capable of strong growth independent of Japan’s current macroeconomic environment.

How do current return on equity (ROE) rates compare to those prior to Abenomics?

Japan’s improvement of corporate governance and focus on returns on capital helped propel companies’ ROE to a high of 10% in 2017, the highest level since 1981. However, with the headwinds of the U.S.-China trade war in 2019 and the COVID-19 pandemic in 2020, ROE declined to high single digits.

We see this setback as temporary, however, and we remain very optimistic about the upward trajectory of ROE in Japanese companies. Many have improved productivity, streamlined balance sheets, and increased efficiencies. In addition, the current low interest rate environment should be a significant contributor to their continued ROE improvement.

What holdings did you add to in the first quarter of 2021?

We increased our position in two companies during the quarter.

The first is Takeda Pharmaceutical, Japan’s largest pharmaceutical company and a global leader in their industry. We believe the company remains undervalued, as the share price has yet to reflect the significant increase in the company’s drug pipeline and its reduced use of leverage.

The second company, Mercari, is an e-commerce business specializing in selling used items. Its app is differentiated from competitors such as Poshmark or eBay in terms of user interface and payments. The company is an asset-light, profitable business, and has become an industry leader in Japan and is rapidly expanding into the U.S.