The Enduring Value of Natural Gas

The Hennessy Gas Utility Fund's Portfolio Managers attended the American Gas Association (AGA) Financial Forum to gain insight into trends affecting natural gas companies including natural gas’ role as a solution for clean energy sources and as a strategic economic asset to the U.S. The following highlights their takeaways from the Financial Forum.

»    Natural gas is an important and critical part of the transition to a net-zero emissions world.
»    The role of natural gas as a component of economic security came to the forefront with the rise of geopolitical events in Ukraine.
»    Natural gas companies continue to offer compelling long-term earnings and dividend growth rates.

Governments, producers, and companies worldwide have been reducing their use of carbon-intensive fuels and instead have been increasingly employing other sources of energy, such as natural gas, wind, and solar, to reduce greenhouse gases. In fact, as shown in the chart below, between 2010 and 2020, consumption of natural gas expanded at the expense of coal usage, which has seen diminished demand with the retirement of U.S. coal-fired power plants.

Looking ahead, natural gas consumption is expected to continue to rise given the ongoing trend away from coal as well as natural gas’ important and critical role in the transition to a net-zero emissions world. As the U.S. increases its use of renewables, the need for natural gas fired power generation capacity will increase. For example, during extreme weather events when peak energy demand is needed, natural gas can provide more than five times as much energy as renewables—critical in keeping people safe and comfortable during life-threatening heat waves and polar vortexes. 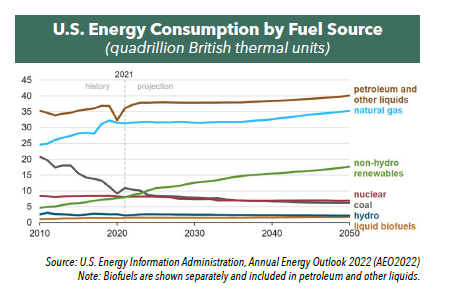 In addition, there are economic impacts to consider in the face of overly ambitious plans to phase out fossil fuels before alternative options, including renewables, are economically efficient. Consider the recent trend where wind and solar power developers have been negatively affected by supply chain issues, surging costs for shipping, parts, and labor, and new tariffs placed on panel imports from Southeast Asia.

Specifically in the solar industry, given the current supply and tariff issues, there is a projected slowdown in installations and at least a one-year delay in several solar projects. According to the Solar Energy Industries Association, in 2022, more than 315 projects have been canceled or delayed due to new tariffs, which could result in a drop of 24 gigawatts of solar capacity over the next two years—more solar than the industry installed in all of 2021.1 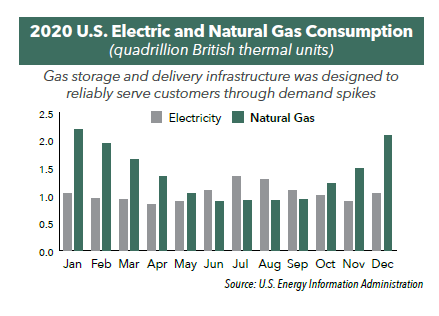 The importance of natural gas to the global industrial and agricultural complex implies that fuel needs will continue to call on the reliability of natural gas as the cleanest hydrocarbon alternative. The energy transition will likely continue to move energy consumption patterns toward lower carbon/no carbon fuel alternatives, but across the hydrocarbon spectrum, natural gas will undoubtedly remain an important component of the fuel mix.

The role of natural gas as a factor in economic security came to a forefront with the rise of geopolitical events, namely the Russian invasion of Ukraine, in the spring of 2022. Natural gas is an integral part of America’s energy independence. With its large supply of accessible natural gas, the U.S. has the ability to not only meet domestic demand but also export natural gas through liquefied natural gas (LNG) terminals. 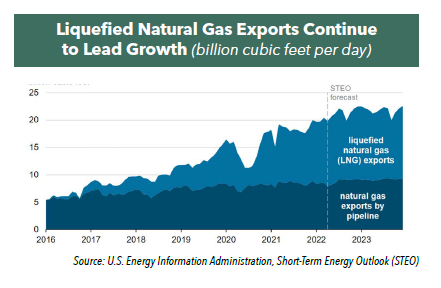 A few perspectives have developed from this geopolitical event, including:

1.    Competitive Advantages of the U.S. Market. The market transparency and free market access to negotiate contracts and secure supplies combine to make U.S. natural gas extremely competitive on the global market.
2.    Growth in LNG Exports. As LNG exports increase, it will have a profound impact
on infrastructure spending at home and abroad. The U.S. administration is starting to understand the need to be less aggressive
in “decarbonizing” the economy as the U.S. exports an additional 15 billion cubic meters (bcm) of LNG volumes to the European Union in 2022 to replace some of the 155 bcm of gas the region imports from Russia. To increase export capacity, numerous LNG facilities are in various stages of permitting and development. The latest terminal to begin exporting LNG is Venture Global’s Calcasieu Pass located in Louisiana. As a 1.3 billion cubic feet per day liquefaction facility, it is the seventh U.S. export terminal.
3.    Reversing Natural Gas Bans. Geopolitical events may have also altered the discourse regarding the push by some jurisdictions to curb or even eliminate the use of natural gas. Previously, some jurisdictions have sought to constrain new gas hookups for residential and commercial structures. In turn, many states have proposed or passed “preemption laws” prohibiting individual cities or counties from banning local gas use. As of May 2022, three states have had local gas bans adopted, while 27 states have adopted or attempted to adopt prohibitions on local bans.

As the only Fund that exclusively invests in a group of publicly traded companies in the AGA, the Hennessy Gas Utility Fund provides exposure to companies that should benefit from the growing demand for natural gas.

•    Many of these companies continue to expect healthy long-term earnings and dividend growth rates despite challenging macroeconomic trends including rising interest rates and higher commodity prices.
•    Due to the resilience of their highly regulated business model, their profitability is less susceptible to changes in rates, weather, or demand. Various beneficial cost recovery mechanisms and revenue trackers have been built into their rate cases along with consistent allowable rates of returns.
•    While the Fund is primarily composed of utilities, major pipeline companies, and LNG exportation businesses, about two-thirds of the Fund’s holdings have exposure to renewable energy. All companies continue to seek decarbonization and environmental initiatives, with renewable natural gas, wind, and solar most widely implemented.