Patience in Long-Term Holdings Paid Off

Would you please provide an update on COVID-19 in Japan?

The impact of the COVID-19 pandemic has been less severe in Japan compared to many other parts of the world. Japan with a population of about one-third the size of the U.S., had 67,000 cases and only 1,300 deaths as of the end of August.  The Japanese government has not implemented stringent lockdowns. The cultural norms of wearing masks and greetings by bowing, instead of shaking hands or exchanging kisses, has helped mitigate the spread. Although Japan experienced a second wave of coronavirus cases in August 2020, they already appear to be subsiding.

To help the economy recover, the government reacted swiftly to pass two stimulus packages totaling 40% of Japan’s GDP. The government’s reaction to the pandemic was far greater in scale and speed compared to its response to the 2008 financial crisis. As a result, Japan has been relatively unaffected by job and wage losses to date. In fact, the unemployment rate in July was just 2.9%, only slightly higher than the March rate of 2.5% 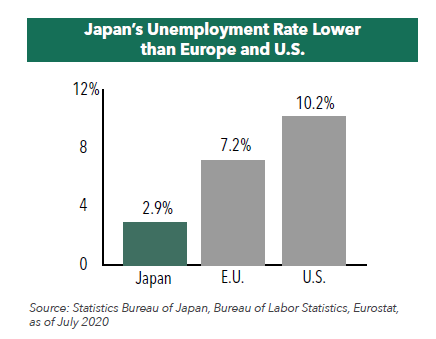 Yoshihide Suga was named leader of the ruling Liberal Democratic Party and elected as Japan’s new prime minister, replacing Shinzo Abe who announced his resignation in August due to health issues. Mr. Suga is one of Mr. Abe’s closest allies and served as his chief cabinet secretary for many years. Prime Minister Suga is expected to continue his predecessor's policies, and we do not foresee changes to fiscal policy, monetary policy, or structural reform initiatives. We believe economic growth will continue to be the priority.

We note that Japan’s large debt level needs to be addressed over time, however, we believe GDP growth can help alleviate the load. Japan’s improving corporate governance, progress on labor reforms, low interest rates, and a benign currency environment will be supportive of economic growth.

Warren Buffett has acquired a 5% stake in each of five trading companies known collectively as “sogo shosha.” These businesses date back to World War II when they helped Japan recover from the devastation of the war by securing natural resources from overseas and assisting Japanese exporters.

Over the past few decades, these companies have grown beyond trading to use their own balance sheets to make investments, leveraging their expertise in certain industries including energy. Today they maintain extremely diversified portfolios of global operating assets across many industries. Not well understood by Western investors and mistakenly thought of as a proxy for mining, the sogo shosha have traded at a persistent discount, generally trading at less than 1x price-to-book despite solid net asset value growth.

We believe Berkshire Hathaway’s purchase could improve sentiment about investing in Japan.

Does the Hennessy Japan Fund invest in any of these sogo shosha?

Yes. Mitsubishi has been a long-term Fund holding, initially purchased in 2007. Mitsubishi’s current balance sheet represents a unique collection of operating assets and securities with a wide variety of geographic exposure and industries not easily accessible through other means of investments. These assets include energy and commodity projects in Australia, truck assembly supply chain businesses in Southeast Asia, electric power plant development and power generation businesses in Europe and the U.S., and convenience store operations in Japan.

Mitsubishi has compounded at 8.3% per annum after paying out 20% of net income, on average, over the 10-year period ending in fiscal year 2019. We would expect the firm to be able to continue this payout stream going forward. With a dividend yield of almost 5%, we believe the expected total shareholder returns should be in the low teens, which continues to make the stock an attractive investment.

How has the Hennessy Japan Fund been able to perform so well in 2020?

As part of our rigorous investment criteria that seek high-quality companies with uncomplicated business models and strong balance sheets, we consider downside risk before evaluating upside potential. As the coronavirus crisis unfolded, we re-evaluated each portfolio company and reaffirmed our confidence to continue to hold them. We believe our patience to maintain our positions in long-term holdings has paid off.

A number of our top holdings have actually benefited from the tailwinds created by the pandemic:

•    Daikin Industries. The company is a manufacturer of ductless air conditioning and air purification and is gaining traction in the U.S.
•    Sony. The maker of the PlayStation console has seen an increase in its gaming revenue.
•    Shimano. The bicycle parts manufacturer has seen a surge in bicycle demand globally as people seek ways to exercise outdoors.
•    Keyence. As workers have been reluctant to return to work, demand for factory automation has increased.
•    Nitori Holdings. The furniture and home furnishings chain benefitted from home improvement trends.
•    Unicharm. Masks are among the company’s personal care product lines.

1) High-quality industrials across industries. Japan’s commitment and reputation for superior craftsmanship and manufacturing excellence provide a meaningful and sustainable advantage.

Would you please discuss current valuations? 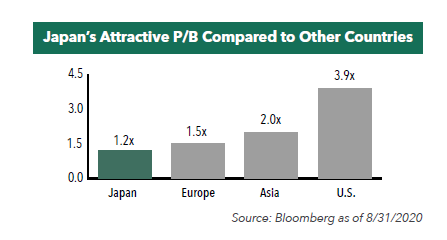 For stock prices to rise, return on equity (ROE) must rise. In 2018, the ROE of the Tokyo Stock Price Index approached 10% for the first time since the great financial crisis. While that level has declined in the past 18 months, we view this as a temporary setback because of the continuous improvement in corporate governance and a strong focus on ROE.

With a benign currency environment and low rates, we expect to see Japan’s ROE rebound, potentially rising above 10% and closer to levels achieved in Europe and the U.S.