For the month of June, the Hennessy Japan Fund (HJPIX) returned -0.64%, while the Russell Nomura Total Market™ Index rose 0.44%. The Tokyo Stock Price Index (TOPIX) lost 0.27% over the same period.

Among the best performers were our investments in Mercari, Inc., an operator of “Mercari,” a flea market application having accumulated one hundred million downloads, Terumo Corporation, Japan’s largest medical device manufacturer, and Misumi Group Inc., the maker and distributor of metal mold components and precision machinery parts.

As for the laggards, Kubota Corporation, Japan’s largest and the world’s leading manufacturer of farming equipment, SoftBank Group Corp., the telecom and Internet conglomerate, and Fast Retailing Co., Ltd., the operator of “Uniqlo” brand casual wear stores detracted from the Fund’s performance.

Following strong returns in 2020, the growth-to-value market rotation in the first six months of 2021 has dampened the Fund’s relative performance versus its benchmark. In analyzing the performance, there was no single investment which individually wreaked havoc on performance, rather all the Fund’s holdings remained out of favor throughout the period.

As portfolio manager, our objective is to produce positive absolute returns over the long term for our clients. In addition, as an open-end fund where investors can go in and out freely at their will, it is equally important to achieve relative outperformance as consistently as possible so as to meet the needs of investors of all types. To achieve this, our approach has been to keep the portfolio balanced between “stable defensive growers” and “economically sensitive long-term compounders” at all times. However, the Fund also purports to be index-agnostic such that it owns relatively few securities (active share as of the end of June was 81%). Therefore, periods of weak relative performance are bound to happen.

What the Fund Missed Out So Far This Year

The absence of certain sector exposures in the Fund’s portfolio has hurt relative performance.

One such example is financials. Bank stocks were notable upside movers on the back of rising yields after many years of being neglected from the secular bull market. While bank stocks are representative of the growth-to-value rotation we have seen lately, we have decided against following the crowd on the following grounds.

1.    We are not convinced that improved rates and economic outlook will be a game changer for Japanese banks at this point in time. The country’s households and corporations are awash with cash today, leaving the likelihood of loan business growth low for commercial banks. There is an argument that the distribution of cash holdings is skewed to certain parts of the economy (old seniors in retail, large corporations in wholesale) thus demand for credit could rise as the economy recovers. But then again, banks’ lending activity never picked up post the 2008 financial crisis even in the recent economic boom years leading up to 2018 (before the onset of U.S.-China trade tensions).

2.    Higher rates should bode well for banks’ interest earning assets however Japan has been struggling to overcome deflation despite all the unprecedented monetary policy aids. Anticipation for a rapid steepening of the yield curve seems premature.

3.    Japanese banks have been and will likely remain a subpar quality business. MUFG’s (Mitsubishi UFJ Financial Group) recently announced the FY2023 return on equity (ROE) target of a paltry 7.5% speaks to the lack of attractiveness.

Semiconductor-related stocks were another bright spot in which the Fund was underweight. Here, even though chips have a much wider application (artificial intelligence, IoT, 5G, data centers, etc) today than two decades ago, our reservations are that revenues of semiconductor production equipment makers (SPEs) could still be prone to boom and bust cycles since their revenues are ultimately tied to the overall global chip production capacity.

The ongoing boom in investments towards chip manufacturing facilities appears to be the equivalent of infrastructure spending. Semiconductor is one of the most fundamental backbones of the information society we have today. Over time, there will be a host of internet companies, software as a service (SAAS) players and other tech disruptors who can then take advantage and capture the value created from this trend. Their products/services will be equipped with more powerful artificial intelligence (AI), faster computing, higher image resolution, better voice recognition, lower latency and so on. Thus, our strategy will be to focus on these companies who can potentially benefit down the road. Good analogies from the past would be avoiding the telecom carriers (i.e. AT&T, Verizon) in favor of the beneficiaries of advanced communications infrastructure (e.g. FAANG, GAFA), or avoiding logistics companies (i.e. UPS, Fedex) in favor of the beneficiaries of logistics infrastructure (e.g. Amazon).

To further expand on this point, we are generally reluctant to invest in capital goods businesses whose revenue drivers are a function of production capacity of the customer industry for that good. Makers of chip production equipment, machine tools, industrial robots, and shipbuilders would come to mind. For these players, once capacity over-build becomes an issue within the customer’s value chain, the business suffers a multi-year demand drought before the next boom kicks in.

In contrast, the reason we favor factory automation names such as Keyence and Misumi as a more attractive industrial business is because they have historically been more resilient in downturns. For example, their corporate customers can quickly stop placing orders for new production equipment when capacity is deemed excessive, but they often maintain their investment in factory automation for cost savings and better efficiency. As the industry cycle starts to pick up, these customers typically respond to rising demand through productivity improvement before investing in new capacity or hiring new staff. These user behaviors bode well for factory automation businesses in general.

Why We Remain Positive on the Current Holdings

We are optimistic about the Fund’s current positions as the prospects of these companies remain bright on grounds that 1) we believe their competitive edges remain unchanged and robust, and 2) they are global franchises whose growth opportunities are not limited to Japan.

Looking at their financial track records, many of the Fund’s holdings have been strong growers as well, compounding their earnings faster than the average company over the last 13 years since FY2007 (peak earnings before the global financial crisis). Consider the following examples: 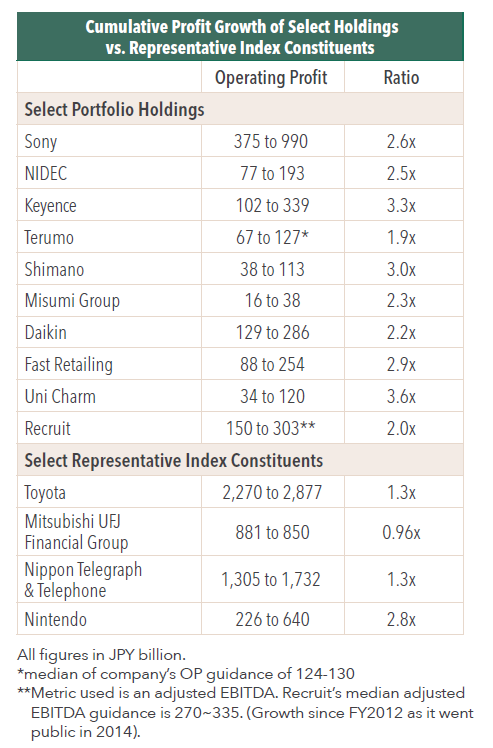 The earnings growth of many of the Fund’s holdings have been higher compared to the broader market. We see the potential for these companies to grow their earnings at similar, if not higher, rates over the next 10-15 years (in some cases we believe their growth will accelerate given emerging growth opportunities such as Nidec’s push into the electric vehicle traction motor business).

While we may have underestimated the impact of the recent rise in interest rates and the ensuing shift in market trend, we do believe the long-term gains from being patient in the current environment will eventually outweigh the short-term pain. In other words, over time the businesses’ strong fundamentals will catch up and drive the Fund’s performance again.

Although our investing style calls for a low-turnover and long-term holding, portfolio action is always taking place at varying degrees to optimize the overall risk/return profile on a mid-term basis (around 3 to 5-year horizon). The activities range from a simple rebalancing of existing names to investing in new stocks.

Speaking of initiating new positions, we said in our 2020 November letter that we are generally averse to investing in value stocks (as defined by a low price-to-earnings or price-to-book) due to the inherent subpar nature of the business. But this does not mean we are always against investing in low valuation stocks (who doesn’t like to invest cheaply?). Sometimes an attractive stock might
be given a value label due to its perceived low quality. But if there is a potential for the business to transform into a quality grower, we are happy to fully commit.

One such stock has recently made it into the Fund’s portfolio and as of this writing we are in the process of accumulating its shares. It is trading at a significantly below average price-to-earnings (P/E) with a 15% ROE and a reasonably healthy balance sheet. The company is a large-cap name and one of Japan’s oldest electric machinery/heavy industrial equipment manufacturers. It had been badly run for many years until 2008 whose downfall culminated amid the global financial crisis, incurring the largest loss ever recorded by a Japanese manufacturer at the time.

Post the debacle, management got their act back together, went through numerous restructurings, thereby significantly improving its base-line profitability. This turnaround phase is largely complete with our assessment of the company moving from
“terrible” to “average.” Now I see the company ready to advance from “average” to “excellent.”2 I have been observing the company transitioning from a manufacturing-driven hardware sales model to a scalable asset-light, solution-based model, which is built around their proprietary industrial Internet of Things platform. Following extensive research, we believe that management has figured out a playbook to grow profitably and consistently going forward.

The investment case may appear a bit antithetical to our track-record focused investing approach but with 13 years since its turnaround and the stock’s low valuation makes it a compelling investment. In our opinion, the stock remains considerably undervalued due to the market’s “anchoring bias” from the times when the company was a lethargic, low margin, troubled hardware manufacturer. We plan to provide you with a more granular discussion in due course.

1. The shares were bought in over the last 12 months as part of the asset disposal program introduced in March of last year. 2. 7globalcapital.com