For the month of May, the Hennessy Japan Fund (HJPIX) gained 2.44% while the Russell Nomura Total Market™ Index rose 3.21% and the Tokyo Stock Price Index (TOPIX) increased 2.64%.

Among the best performers were our investments in Sony Group Corporation, a diversified consumer and professional electronics, gaming, entertainment, and financial services conglomerate, Hitachi, Ltd., one of Japan’s oldest electric equipment and heavy industrial machinery manufacturers, and Olympus Corporation, the leading company in the medical field such as gastrointestinal endoscopy, which has a 70% share of the world market.

One of the pitfalls in growth stock investing is that the investor could easily get enamored by the business’s rosy outlook and bake into the share price unrealistic profits far into the future. Because of this, in an environment of rising interest rates like today, where the growth-to-value market rotation is all the rage, all things “growth” are viewed as sure losers. But is it really true that all growth stocks, as defined by high price-to-earnings (P/E) multiples, are destined to fall? Should we think that all growth stocks are experiencing correction because they were overpriced?

A 1998 article written by finance professor Jeremy Siegel entitled “Valuing Growth Stocks: Revisiting the Nifty Fifty” offers some insights that this is not necessarily the case.

The Nifty Fifty was a group of premier growth stocks, such as Avon, Disney, McDonald’s, IBM, Polaroid, and Coca-Cola, that became institutional darlings in the early 1970s. Each company was a leader in its field with a strong balance sheet, high profit margins, and double-digit growth rates. As such, the common perception among institutional investors was that these stocks should always be bought and never sold (hence dubbed “one decision stocks”), regardless of their prices because they believed that the only direction they could go was up. So institutions loaded up on these stocks.

The common narrative is that institutional investors were to be blamed for driving up the prices of these names to absurdly expensive levels. But the key argument of this article was not to caution against high P/E stocks, but rather the fact that the market actually had the foresight to bid up these stocks such that they went on to perform almost in line with the broader market in the subsequent decades.

As shown below, an equal-weighted basket of the Nifty Fifty stocks did not underperform the index all that much over the following 26 years through 1998. In other words, the Nifty Fifty stocks were for the most part fairly priced at the end of 1972. This also implies that if you had invested in these stocks after the significant correction in 1973-1974, the subsequent returns would have been far superior to the index.

Though it required a tremendous amount of patience, a few Nifty Fifty stocks outperformed the index during this period even when the returns were measured from the 1972 peak share prices. In the case of Coca-Cola, which was selling for a P/E of 46 times at its peak, could have been bought at more than 80 times 1972 earnings and the result would still have matched the average market return. 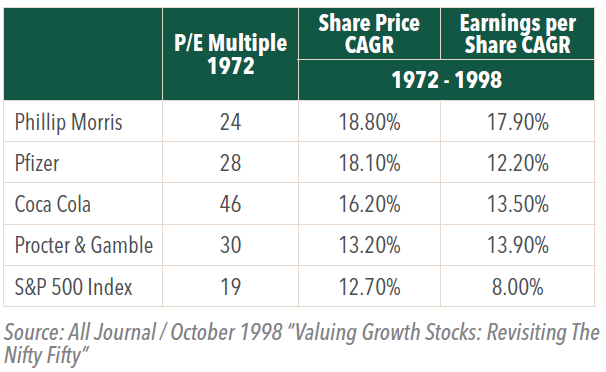 This finding ties into the well-known fact about Mr. Market (or collective wisdom) being a pretty good predictor of the future as we discussed back in our September 2021 letter. A 2004 book called “The Wisdom of Crowds,” written by James Surowiecki, describes the amazing predictive power of the so-called “collective wisdom.” There are certain conditions that need to be met for the collective wisdom to exhibit its powerful predictive ability including: 1) the opinions have to be amply diverse, 2) each individual’s opinion has to be formed independent of others, and 3) the result of the aggregated opinions must be expressed in single output like a number. This is essentially what the stock market is, and for this reason, statistically Mr. Market is more often than not correct. Of course, this does not mean the market is infallible. There have been occasions when the market can be completely wrong as we all know.

This is why we have not rushed to exit our long-term positions just because the Fund’s holdings were trading at higher multiples than the broader market. We believe that once the storm passes in due course, the holdings will drive the Fund’s performance again. Meanwhile, we will continue to “upgrade” the Fund’s portfolio as attractive investment ideas emerge. To this end, as a growth manager with price discipline, We have made major investments in Sony Group and Hitachi in the last 2.5 years, which are now among the Fund’s largest holdings. At the time of purchase, both companies offered strong earnings prospects over the longer term yet were trading at value-stock like P/E multiples. Hence we call them “growth stocks in disguise.” In our upcoming letter, we plan to discuss our latest investment, which should also qualify for the “growth in disguise” designation. Stay tuned.