In summer 2020, Tokyo will host the Olympic games, providing Japan an opportunity to showcase itself to the world. Investments in technology and infrastructure will delight visitors during the 2020 Games and beyond, and this strategy may help trigger a new growth period for Japan’s economy.

During the 2020 Summer Games, Tokyo will have the world’s attention, with hundreds of thousands of spectators in the Olympic stands and billions watching from home. When the city hosted the 1964 Games, the Olympics was used as a platform to unveil the high-speed train. During the 2020 Olympics, Japan will showcase its global leadership in robotics, technology, and sustainability, including:

Toyota’s Technology:  As a Worldwide Olympic Partner, Toyota will have miniature self-driving robot cars using artificial intelligence to fetch javelins and hammers. The company also plans to have more than a dozen self-driving taxis run a continuous loop within the Olympic Village to shuttle athletes and staff.1 Further, Concept-i, a self-driving Toyota vehicle that has AI technology, will accompany torch relay runners.

Recycled Medals and Clothing: The Tokyo 2020 Medal Project has the goal of making over 5,000 gold, silver, and bronze medals from recycled goods. In addition, sportswear company Asics is collecting 30,000 articles of clothing to make uniforms for the opening and closing ceremonies and the medal presentations at the podiums.2

Beyond technology, Japan is making infrastructure improvements to improve tourists’ experience and accommodate visitors during the Games and beyond. As a result of these efforts, the Tokyo Metropolitan Government estimates the Games could create an economic tailwind totaling 32 trillion yen ($284 billion) and an estimated 2 million jobs.3

Transportation Improvements: The Toranomon- Azabudai area will feature a new train station and a bus terminal along with bus rapid transit systems to connect central Tokyo with the bay area. New roads around Tokyo will also improve access to city centers and international airports.4  The Haneda Airport plans to increase the number of international flight slots from 60,000 annually to a maximum of 99,000 annually byMarch 2020 in time for Olympic visitors.5

Hospitality and Housing: Between 2019 and 2021, new hotels are expected to open across nine major Japanese cities, increasing the number of rooms from 30,000 to 80,000.6 In addition, the Olympic Village will be converted to residential towers with 6,000 units
along with a retail facility after the Games.

Olympics as Catalyst for Future Tourism

Japan is seeking to avoid the fate of past Olympic Games, such as the 2014 Winter Games in Sochi, where cities overspent on infrastructure used solely for the event. Rather, Japan is looking to follow London’s lead, as the country was successful in attracting an increasing number of tourists following the 2012 Olympic Games. After the events, the U.K. enjoyed a 16% increase in the number of visits between 2013 and 2018, from 32.7 million to 38.0 million tourists.7

According to the World Tourism Organization, Asia is currently the second most visited region in the world and international tourist arrivals to the Asia Pacific region are forecasted to reach 535 million by 2030, 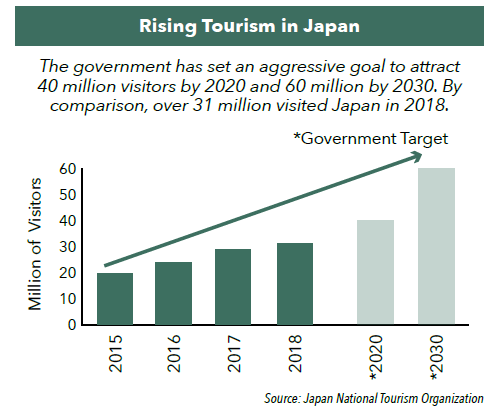 an increase of approximately 5% per year.8 Japanese officials are seeking to attract an increasing number of these visitors to their country, thereby boosting long-term economic growth. To this end, the Japanese government has set an aggressive goal to attract 40 million visitors by 2020 and 60 million by 2030. By comparison, in 2018, approximately 31 million visited Japan.

The 2020 Games are setting the stage to position Tokyo as a top tourist destination. We believe this increased visibility will help Japan reach its aggressive tourism goals, which could have a meaningful long-term economic impact.

Benefit from Japan’s Shining Moment on the World Podium

The 2020 Olympics could mark a continued upward trend for the Japanese economy and significantly boost its visibility within the international community.