Although Warren Buffett’s picks are five of the top 10 largest companies in Japan, few Westerners understand exactly what they are or what they do, which can challenge conventional valuation approaches. That is partly due to being a uniquely Japanese company. Although they are often referred to as general trading companies, investment company is a more apt description for these conglomerates collectively known as “sogo shosha.”

Sogo shosha have evolved from trading companies dating back to World War II when they collectively helped corporate Japan, which lacked natural resources domestically, recover from the devastation of the war by procuring resources from overseas and aiding exporters. In the 1980s and 1990s, these companies grew from a commission-based trading business and started using their own balance sheets to make investments in extremely diverse operating assets across many industries and around the globe.

Although they nearly went bankrupt during the 1997 Asian financial crisis, the sogo shosha recovered and remained largely unscathed during the 2008 financial crisis. During the more recent China/U.S. trade war and COVID-19 pandemic, earnings were negatively affected but balance sheets remained healthy given very limited downside risk.

These classic value stocks with above-average growth over the long-term fit Buffett’s classic investment style. Buffett looks for targets in unfamiliar markets, and in this case, saw what most investors missed. The share prices of the sogo shosha have consistently traded at a discount to their intrinsic values due to mistaken perceptions by non-Japanese investors.

These companies have been treated more like a mining proxy due to a historical reliance on commodity prices. However, their portfolios encompass far more than that today and represent a unique collection of operating assets and securities with a wide variety of geographical exposure and industries that are not easily accessible through other means of investments.

Looking at their valuation matrix, these companies have generally traded at high single-digit multiples, with a price-to-book of less than 1x, despite strong earnings and net asset growth rates over the last 5, 10, and 15 years without much volatility. They have also paid dividends in the 4-5% range. 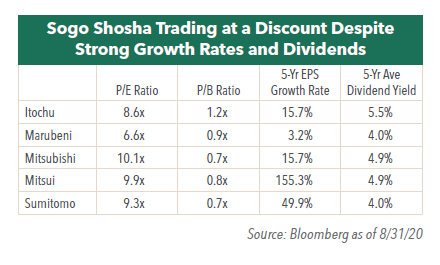 We believe Buffett’s latest move confirms that the Japanese market deserves a closer look. We also think it underscores the importance of understanding the unique culture, history, and nuances of corporate Japan. The Hennessy Japan and Japan Small Cap Funds are sub-advised by Tokyo-based SPARX Asset Management Co., Ltd., whose decades-long familiarity with the inner workings of corporate Japan has allowed them to translate insights into winning investment ideas.

The Hennessy Japan Fund maintains a concentrated portfolio of globally oriented Japanese companies, and Portfolio Manager Masakazu Takeda has owned Mitsubishi, the largest of the sogo shosha, for many years and understands that traditional metrics do not work when evaluating the company given their unique mix of assets. Because Japan remains a mystery for many U.S. investors, active investment management with “feet-on-the-street” in Japan can uncover hidden opportunities often missed by others.