Over the last five years, a difficult operating environment and misalignments between midstream MLP (master limited partnership) investors and industry management teams have contributed to declines in distributions and stock prices. However, we believe that today midstream companies are at an important inflection point, poised to resume distribution growth that should attract favorable investor attention.

The decline in the price of oil from 2014 to 2016 hurt midstream companies’ cash flow growth, and as a result, many cut their capital spending budgets and their distributions. The Alerian MLP Infrastructure Index (AMZI) saw its trailing twelve-month distribution per share fall from a high of $43 in October 2014 to $33 in June 2019. The stock prices of midstream companies retreated also, following the decline in distributions.

There have been many significant, positive changes for midstream energy companies over the last few years:

Return to Growth in Cash Flow. Midstream companies are benefiting from the rapid growth in production of crude oil and natural gas in the U.S., with higher volumes flowing through their gathering, processing, pipeline, and storage assets. This has, in turn, led to higher revenue and cash flows. Cash flows have been rising steadily since the beginning of 2017, and the first quarter of 2019 marked the eighth consecutive quarterly increase in cash flow generation for midstream companies.1

Improved Capital Discipline and Stronger Balance Sheets. Management teams have shifted away from “growth at all costs” towards a more disciplined approach to growth focused on stronger balance sheets and more self-funded capital spending. Through a combination of moderated spending programs and higher cash flows, midstream companies have successfully increased the portion of capital spending funded with company cash flow from 7% in 2015 to 29% in 2018, with a further increase to 42% projected for 2019.1 Lower capital spending has meant less reliance on equity issuance to fund growth and the potential for more cash to be paid out in distributions. Balance sheets have also become stronger, with midstream company-level debt to earnings before interest, tax, depreciation, and amortization (EBITDA), moving steadily lower over the last few years as management teams have used cash to pay down debt.

Elimination of IDRs. A majority of midstream MLPs have addressed a major investor concern by eliminating Incentive Distribution Rights (IDRs). IDRs had diverted distributable cash flow away from limited partnership unit holders in favor of the GP, or general partner. In March of 2014, 70% of the AMZI was comprised of companies with IDRs, and by March of 2019, this figure had fallen to just 16%.2 As a result, we believe midstream companies are now better positioned to increase cash payouts to investors as company cash flow generation has continued to rise.

Historically Low Valuations. Despite a meaningful improvement in midstream MLP financial strength, MLP valuations stubbornly remain at near historic lows. Over the last ten years, the AMZI has traded at an average multiple of approximately 11.1x on an Enterprise Value (EV) to forward 12-month EBITDA basis. Currently, the AMZI trades at roughly 9.7x EV to forward 12-month EBITDA (as of 6/30/19). 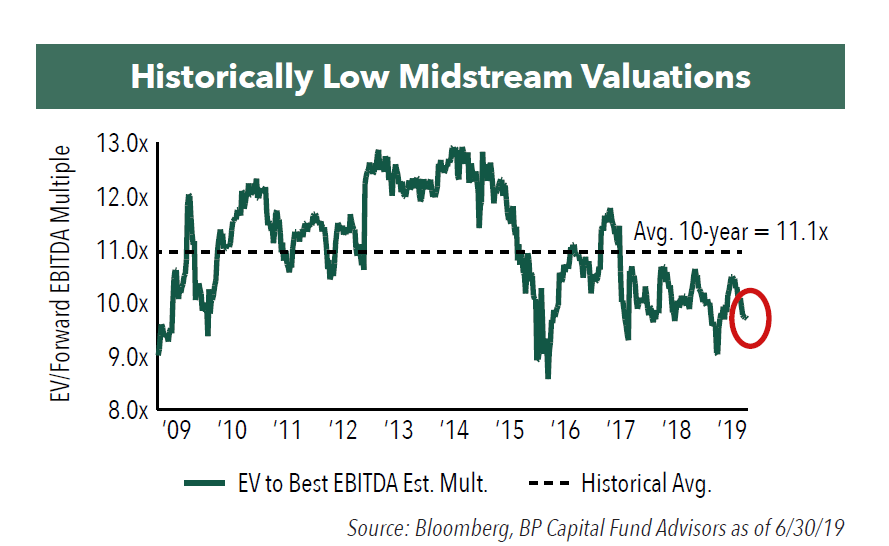 We believe midstream companies today are in a strong position to begin increasing their distributions, powered by steady cash flow growth, moderated capital spending budgets, and better governance practices, and that stock price increases should follow.

Payouts Projected to Rise. The financial strength and ability to pay out more cash to investors has improved dramatically for midstream companies. Based on analysts’ consensus estimates, dividends appear to have troughed at the end of the first quarter of 2019 and are projected to rise in the second half of 2019 and into 2020 and 2021. On a compound annual growth rate basis, distributions are projected to grow at 3.3% between year-end 2019 and 2021. 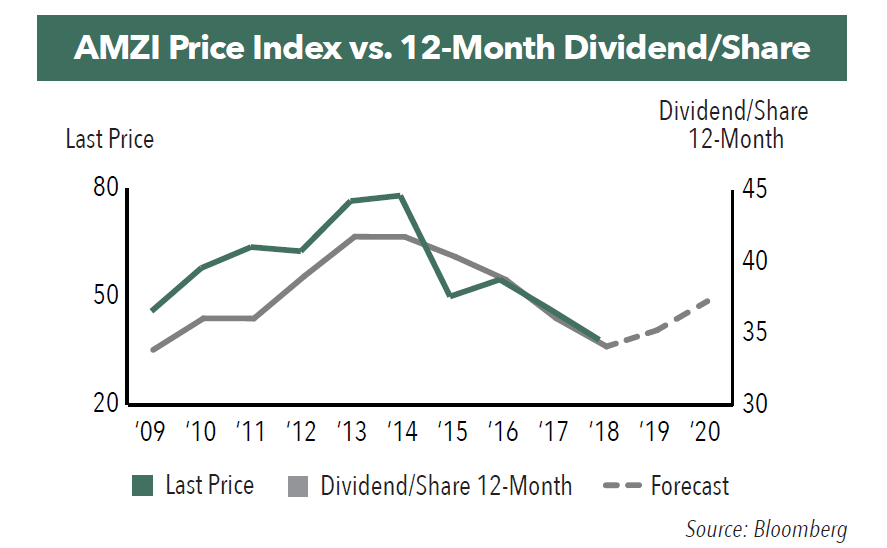 Strong Distribution Coverage. Midstream management teams have been cautious about raising distributions over the last two years, even though cash flows have been growing. As a result, coverage ratios (defined as distributable cash flow divided by distributions paid) have risen on average from 1.30x in 2016 to nearly 1.47x in 2018.2  We believe rising coverage levels are an indicator of distribution and dividend stability and point to the potential for future payout increases.

We believe 2019 will be a pivotal year for midstream companies, presenting a tremendous opportunity for investors. Supported by a combination of improved corporate governance and positive industry fundamentals, midstream companies are expected to begin increasing payouts in the second half of the year, and we expect stock prices to again closely follow distributions as they have historically.