Trends and Insights for the Energy Sector

Macroeconomic concerns have exerted significant pressure on energy stocks in recent months. Can you comment on the sector’s underperformance?

Energy stock prices and crude oil prices tend to be highly correlated. However, the year-to date performance of Energy sector equities has significantly lagged oil prices, which have remained relatively resilient. Notably, during the first half of 2019, the S&P 500® Energy Index rose only 11%, versus the 28% increase in the West Texas Intermediate (WTI) oil price. Energy investor confidence weakened during the second quarter primarily due to the ongoing trade dispute between the U.S. and China.

Despite the potential headwinds associated with softening global demand growth, we remain constructive on energy equities, as we expect oil prices to remain supported by supply-side factors, such as OPEC production cuts and the continued sanctions on Iranian exports. 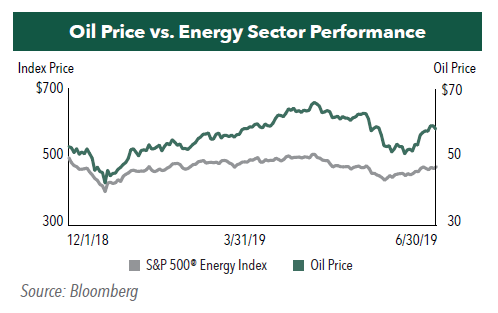 How are energy companies progressing with their commitments to capital discipline?

Over the last year, energy companies have been successful in limiting excess capital spending and focusing on generating free cash flow. Earlier in the decade, shale oil producers were focused on growing production, regardless of cost, and many companies spent far more in capital investment than they could finance from operations. More recently, however, management focus has shifted away from “growth at all costs” towards keeping capital spending in check, generating free cash flow, and returning excess capital to shareholders in the form of dividends and share buybacks. Most producers are basing their development plans on $50 per barrel oil WTI. As a result, larger U.S. producers are expected to lower capital spending as a percentage of cash flow from operations to an average of just 100% in 2019 (down from over 250% in 2016) and reduce the percentage even more to approximately 80% by 2021.

We believe these shareholder-friendly actions taken by many energy producers have enhanced the attractiveness of the sector.

Would you comment on recent consolidation activity in the Energy sector?

To achieve the benefits of economies of scale, we believe that both integrated oil companies and larger production companies are considering acquisitions, particularly those of fast-growing shale oil producers in the Permian Basin. Several corporate deals were struck in 2018, including Concho/RSP Permian, Diamondback/Energen, and Encana/Newfield Exploration, and we expect consolidation to continue.

A high-profile example is the pursuit of Anadarko Petroleum by both Chevron and Occidental Petroleum in April. Chevron made the initial bid for $65/share, or a 39% premium to Anadarko’s stock price. Occidental subsequently offered $76/share, a 62% premium. We believe this illustrates the attractiveness of independent, “short cycle” (drilling to full production in 3-6 months) exploration and production companies. Most recently, Callon Petroleum announced it will acquire Carrizo Oil & Gas for more than $1.2 billion, which represents an 18% premium to Carrizo’s stock price, as they look to achieve scale in the Permian Basin.

In May, within the midstream sector, Australian private equity firm IFM Investors announced a deal to purchase all outstanding units of Buckeye Partners, LP. IFM’s offer reflected a 28% premium to Buckeye’s share price, which signals to us that current midstream sector valuations appear unsustainably low.

Why should investors take a closer look at midstream energy companies now?

We believe midstream companies are at an important inflection point, and that conditions are in place to allow midstream companies to begin raising distributions. Driven primarily by growth in volume, cash flows have been rising steadily for midstream energy companies since the beginning of 2017, and the first quarter of 2019 marked the eighth consecutive quarterly increase in midstream sector cash flow generation.

A majority of Master Limited Partnerships (MLP) midstream companies have eliminated Incentive Distribution Rights (IDRs) that reduced the amount that could be paid out in distributions to the unit holders of the limited partnership. As a result, midstream MLP companies are now better positioned to increase cash payouts to investors as cash flows rise.

On a compound annual growth rate basis, payouts are projected to grow at 3.3% between year-end 2019 and 2021. Historically, stock prices have followed distributions and we expect them to do so again in this cycle. 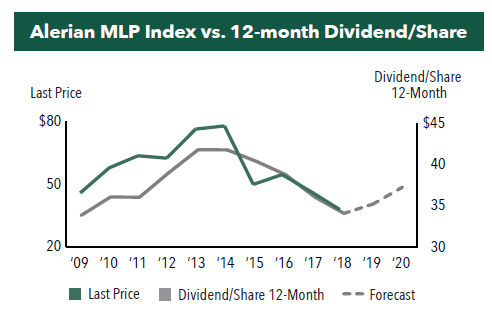 What notable portfolio changes have taken place during the first half of 2019?

We have continued to add exposure to midstream companies given the strong fundamentals noted above, including adding positions in Oneok and Magellan Midstream Partners, LP in Q2.

Refiners have delivered standout performance this year and tend to deliver strong yields, and we expect to see a sharp rise in earnings next year for the segment. As such, we have increased exposure to the segment this year through Delek U.S. Holdings, Valero, and Marathon Oil. We believe refiners will benefit significantly from the new International Maritime Organization emissions standards designed to reduce pollution produced by the world’s ships, which are set to begin in January 2020.

As we looked for opportunities to reduce risk and volatility within the portfolio, we have eliminated companies with higher leverage, including Summit Materials and Oasis Petroleum. We have also increased exposure to “majors,” companies such as Royal Dutch Shell and ConocoPhillips, which tend to have relatively low beta and high dividends. We believe these companies are well positioned to benefit from the higher oil prices we’ve seen in 2019, but can also deliver strong cash flows at oil prices in the $50 range. 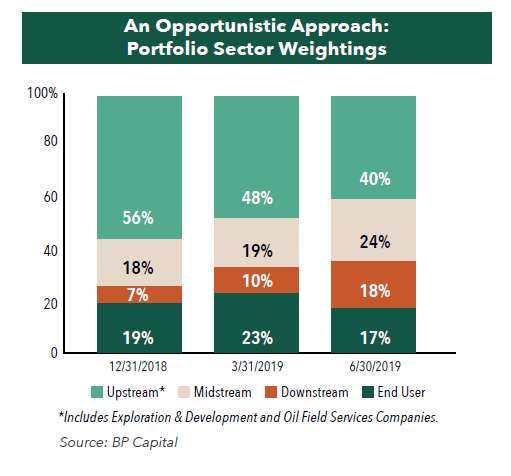